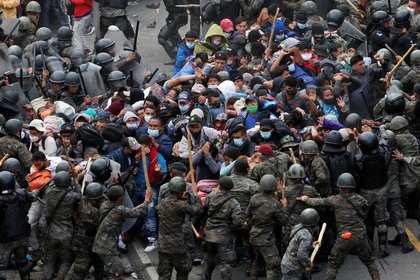 Hondurans, who are participating in a new migrant caravan to the United States, collide with Guatemalan soldiers when they try to cross into Guatemalan territory, in Vado Hondo, Guatemala, January 17, 2021. REUTERS / Luis Echeverría

Thousands of migrants who entered eastern Guatemala on foot, on their journey from Honduras to the United States, were stopped this Sunday by the police, who fired tear gas at them, and by the military who beat up those who insisted on advancing by force.

The security forces surrounded the migrants on a road in the town of Vado Hondo, in the department of Chiquimula, border with Honduras. According to police figures, at least 6,000 of the 9,000 people estimated to have entered Guatemala have reached this place.

After forcibly crossing the Florido border point, thousands of migrants began to gather on Saturday afternoon at a military checkpoint in Vado Hondo, where they were first asked for documents and a negative test for COVID-19 in the midst of struggles, which in the night they escalated to clashes.

Two groups of migrants, who spent the night in the area, joined together early Sunday to try to cross the barricade of more than 3,000 police and soldiers, but were repelled, according to the Guatemalan immigration authority.

The deafening detonations of gas shots and smoke sent thousands back on the highway, while others sought refuge in mountains. ANDn their flight, some dropped their belongings. Those who insisted on breaking the fence were beaten.

A health official from the region, who did not identify herself, He detailed that there are several injured by the blows received.

Unlike on Friday, when the police were unarmed and it did not stop the caravan from entering the El Florido border crossing, on this occasion a group carried firearms.

– They will not happen –

“Here is the bulk of the caravan” and “we will not let them pass”, a police officer told ..

Since Saturday night, migrants have been stranded at this strategic point because it is difficult to continue on the other side, due to the rugged geography of the place.

Hondurans say they seek to escape poverty, violence, unemployment, lack of education and health, which was aggravated by the covid-19 pandemic and the hit of two hurricanes in November.

Video images shared by the Guatemalan government showed hundreds of migrants, many without masks, pressing against a wall by the security forces, who used sticks to repel the wave of people.

“Several injured people, migrants, Army and migration personnel are reported,” the spokeswoman for the Guatemalan Migration Institute (IGM), Alejandra Mena, without specifying the number, adding that they were coordinating support with health personnel to care for the injured.

The Guatemalan authorities had calculated the day before thate 7,000 and 8,000 people had entered its territory since Friday, trying to flee the violence and poverty exacerbated by the coronavirus pandemic and the passage of two powerful hurricanes in the region at the end of 2020.

Between Friday and Saturday, Guatemala had sent back nearly 1,000 migrants who entered from Honduras, the immigration authority said, while the caravan tried to advance towards Mexico.

The Mexican government, which tightened controls on its southern border, recognized the work of Guatemala for acting in a “firm and responsible” manner regarding the contingents of migrants who “violated its sovereignty” through a statement from the Foreign Ministry on Saturday night.

The caravan is also encouraged by the hope of a possible relaxation of immigration policies in the United States, when the president-elect, Joe Biden, takes office on January 20.

But Washington has already ruled out the possibility. “Don’t waste your time and money and don’t risk your safety and health. It is a mortal journey “, said the acting commissioner of the Office of Customs and Border Protection of the United States (CBP), Mark A. Morgan.

Trump himself extended the “national emergency” on Friday on the border with Mexico, first imposed in February 2019 to unlock funds and build its much-heralded wall.

The caravan occurs a few days after the president-elect of the United States, Joe Biden, take office. Biden has promised a more humane approach to migration, in contrast to outgoing President Donald Trump. But there are commitments in place, so the migrant group is likely to face further pressure to advance to Mexico.

With information from . and REUTERS