Day 10 of the Premier League could have changed significantly after the Liverpool, but Chelsea and Tottenham they also ended up in tables and the Leicester city, who could take the lead alongside reds and spurs, surprisingly lost to a gasping Fulham. And in two weeks, Mourinho and Klopp They will face each other in a duel for the leadership that promises to be exciting.

The West Ham United is fifth and is going up without making much noise, the Manchester City also recovers positions, the Chelsea keep pace and the Arsenal does not finish carburetting.

This is the ideal eleven of matchday 10 of the Premier League, thanks to the data from Sofascore, and this is the classification of the English first division.

Illan Meslier: The 20-year-old Leeds United goalkeeper once again put together a great performance for the Whites, who beat Everton 1-0. Those of Marcelo Bielsa, who after a great start had dropped some positions, return to the path of victory at the expense of an Everton that also begins to weaken.

Nathaniel Phillips: Great level that Nat Phillips showed in the axis of Liverpool’s defense. Emergency replacement for Klopp, the 23-year-old center-back was very sober on defense as the minutes ticked by. It started with some defensive imbalance but it was a plane over the top and ended up showing a great level despite the fact that Liverpool in general did not play a great game. In the end, Robertson’s controversial penalty over Danny Welbeck was transformed by Pascal Gross for Brighton and they saved a point they deserved. Despite the draw, Liverpool continues to co-lead the Premier and the Seagulls remain sixteenth.

John Stones: Crushing victory for Manchester City 5-0 over Burnley. The Citizens kept a clean sheet and much of the blame is on the good defensive work of Stones. City, eleventh, continues to climb positions and still has a pending match to play. The Clarets, for their part, returned to the path of defeat and much will have to change in order not to spend the remainder of the season in the relegation zone.

Angelo Ogbonna: The Italian central opened the scoring for West Ham United, who ended up beating Aston Villa 2-1. Ollie Watkins scored in added time for the villains but VAR disallowed the goal for offside. Hammers get fifth and Dean Smith’s begin to lose steam and drop to 10th.

Riyad Mahrez: Author of a hat-trick against Burnley, Mahrez was the best of the game against the Clarets. The Algerian was a dagger on the right wing and helped City to finally have a comfortable victory to recover positions in the table.

Jack Grealish: What else can you say about Grealish? Great goal from the English midfielder to West Ham and once again managed the Aston Villa game and was the best of the match. However, the match ended in defeat for the villains.

James Ward-Prowse: The English midfielder is in great shape. He scored again from a free-kick and assisted Jan Bednarek but despite Southampton going 2-0 up, they couldn’t avoid defeat at the last minute against Cavani’s Manchester United. The Saints drop to sixth place and the Red Devils move to ninth.

Matheus Pereira: First win of the season for West Bromwich Albion, who are within one point of salvation after beating a Sheffiled United that seems doomed to relegation. The Brazilian Matheus Pereira was the best of Slaven Bilic’s West Brom.

Joelinton: The goals were slow in coming but an assist from Joelinton to Callum Wilson on 88 ‘and the same from Joelinton himself on 90’ gave Newcastle victory over Crystal Palace at Selhurst Park. Duel in the middle of the table that Steve Bruce’s men took, who are thirteenth, and Roy Hodgson’s men fall to fifteenth place.

Edinson Cavani: The Uruguayan played his best game since he was at Manchester United. Although Alex McCarthy was very good in the Southampton goal, Cavani scored two goals, the last of them, in the 93rd minute to give the victory to Solskjaer’s side. 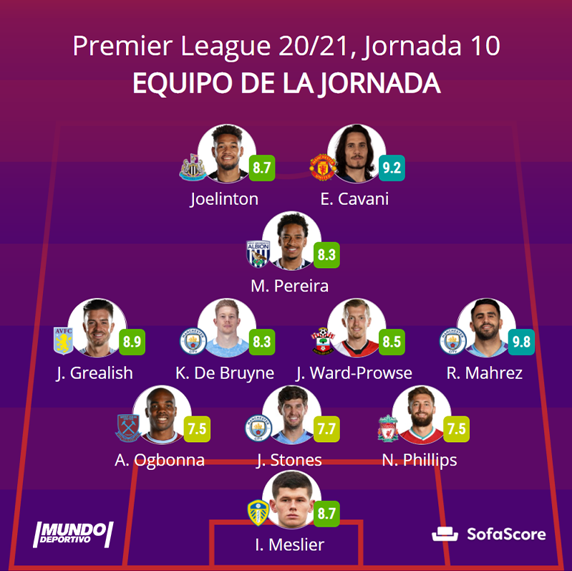 Ideal eleven of the day 10 of the Premier League