. Banner in favor of the singer Britney Spears, who fights before the Justice to win her tutelage.

Britney Spears broke the silence after a long time without making public statements, in the framework of a public hearing in which she again pleaded for the end of the guardianship that her father, Jamie Spears, has exercised over her since 2008.

Britney, 39, approached Supreme Court Justice Brenda Penny and asked to suspend her father as guardian of her millionaire estate, which was valued last year at $ 60 million, reports CNN.

“I told the world that I am happy and that I am fine,” the singer said of the arrangement that has been in place for almost 13 years. Although she clarified: “I am traumatized. I’m not happy, I can’t sleep. I am so angry, it is insane ”.

According to the aforementioned news network, Spears spoke for more than 20 minutes when reading a letter during the virtual hearing in which she testified in front of the court.

“A lot has happened in the last two years, the last time I was in court. I have not returned to court because I did not feel that they listened to me, ”said the popular singer, who had the support of hundreds of fans who gathered in Los Angeles Grand Park to support her idol.

In fact, Britney’s followers made the #FreeBritney trend viral on social networks, they asked for the end of the ordeal for the singer that marked an era in the late 90s and early this century.

Spears says she was prescribed lithium against her will

During another part of her testimony, Britney Spears revealed that she has been prescribed lithium even though she refused to ingest it.

“It is a strong drug. You can get mentally damaged if you take it for more than 5 months. I felt drunk, I couldn’t even have a conversation with my mom or dad about anything, “the singer confessed, according to information collected by CNN

And he completed: “They had me with six different nurses.” 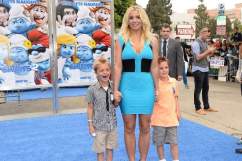 In addition, the interpreter of famous songs such as “… Baby One More Time”, “Oops!… I Did It Again” and “You drive Me Crazy”, among other great successes, expressed in court her desire to be a mother again, together to his current partner Sam Asghari.

“I want to be able to get married and have a baby. They told me I couldn’t get married. I have an IUD inside me, but this supposed team won’t let me go to the doctor to remove it because they don’t want me to have any more children. This guardianship is doing me much more harm than good, ”lamented Britney, mother of Sean and Jayden Federline.

While Britney Spears continues to fight to regain control of her life after 13 years under the tutelage of her father, social networks have been flooded with messages of support for the singer along with the ‘hashtag’ #FreeBritney. 🙌 pic.twitter.com/qiDqU9nFh8

Along the same lines, Britney pointed out that she has not been able to travel by car alone since she is under the guardianship of her father. In addition, she asked to be “heard” to “share my story with the world.”

“Having made me keep this for so long is not good for my heart. I am concerned that I will not be allowed to be heard. I have the right to use my voice. My attorney says I can’t let the public know what they did to me… I should be able to not be in a conservatorship. Laws must change. Ma’am, I’ve been working since I was 17 years old. I can’t go anywhere unless I meet someone every week in an office. I really believe that this guardianship is abusive, but ma’am, there are a thousand guardianships that are also abusive. I want to end the guardianship ”, he stressed.

Once the statement of Britney Spears in court was consummated, the former “NSYNC” publicly expressed his support for the singer in her fight to regain the power of her heritage.

“After what we saw today, we should all support Britney right now,” Timberlake wrote on his Twitter account,

He continued: “Regardless of our past, good or bad, and no matter how much time has passed… what is happening to you is simply not right. No woman should ever be restricted from making decisions about her own body ”.

After what we saw today, we should all be supporting Britney at this time.

Regardless of our past, good and bad, and no matter how long ago it was… what’s happening to her is just not right.

No woman should ever be restricted from making decisions about her own body.

CNN recalls that Spears and Timberlake began dating as teenagers, and confirmed that they were a couple in 1999.

However, the musician, married to actress Jessica Biel since 2012, tweeted: “Jess and I send our love and our absolute support to Britney right now. We hope that the courts and her family will do things well and let her live the way she wants to live ”.