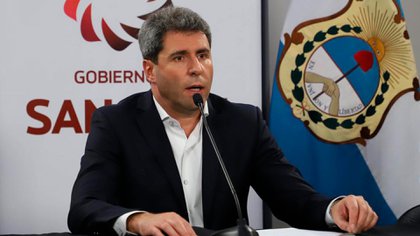 The governor of San Juan, Sergio Uñac broke the link between the province and the National University of San Juan (UNJS), as a result of several critical reports from a group of experts of that house of studies on health management and the official data load linked to the number of coronavirus infections.

Through a letter addressed to the rector Oscar Nasisi, the Cuyo president made the decision to “waive, and / or terminate any current collaboration agreement celebrated with the institution”. The argument points out that the university “violated mutual trust“With the Executive Branch for qualifying that”the official data issued daily by the Ministry of Public Health are not reliable ” de San Juan.

“Said framework agreements, and the addenda signed accordingly, imply the mutual trust of the intervening parties, acting in good faith and providing security in the data that they contribute to the joint projects,” describes the letter from Uñac that informs the rector that the agreements will be canceled.

The discomfort in El Cuyo It was unleashed after the Automation Institute (INAUT), which depends on the Faculty of Engineering of the UNSJ, released a series of reports that directly question the Public Health area of ​​the San Juan executive.

In one of his latest analyzes, published on November 17, the engineer Daniel Patiño considered that the health official part did not communicate the number of “suspected cases ” and charged against the delay for processing the tests.

“The delay today is around 12 days. Inadmissible”, Said the researcher about the swab tests, which specified that the performance of these tests should be carried out within a maximum period of 48 hours. And he assured that that blackberry “gives an idea of ​​the lack of supplies, damage or saturation of the analysis laboratory. Sure is a scandalous number”.

Patiño even went much further in his questions. He estimated that San Juan will be around a “Average of 700 and 800 cases”Diaries of infections by COVID-19, unlike what San Juan officially reports, which only detected 73 in the questioned report. 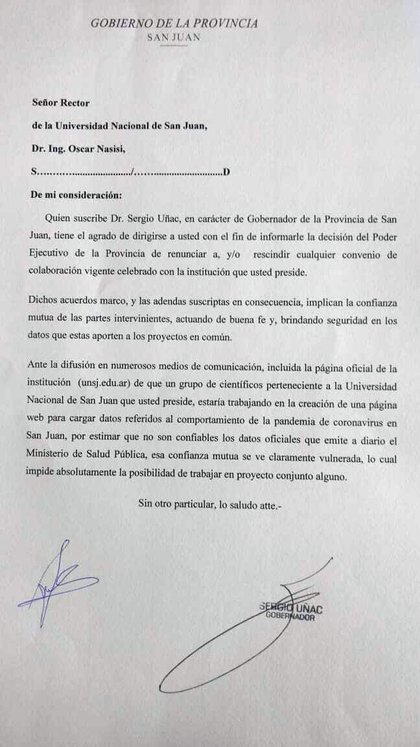 The letter from Sergio Uñac who renounces all the agreements entered into with the National University of San Juan (UNSJ).

But it is not the only point. For another INAUT scientist, Santiago Tosetti, the San Juan government made a mistake in not extending Phase 1 any longer and that “there should not have been a jump from Phase 1 to 3”. These decisions would have led to the current level of population circulation being “very high” and, therefore, is “making the local health system collapse.”

Faced with such a diagnosis, the institute that depends on the UNSJ announced that would launch this weekend a specialized web page to contrast the official data of the Cuyana province. “We will adjust them and use our models,” anticipated Patiño. That project and the media coverage of the reports provoked unease in Governor Sergio Uñac.

“Because we estimate that the official data issued daily by the Ministry of Public Health are not reliable, that mutual trust is clearly violated, which absolutely prevents the possibility of working on any project“Concluded the president in his letter that bears his signature.

The underreporting in the counting of the epidemiological evolution of the coronavirus has been a source of confusion throughout the country, but also in the rest of the world. The most prominent case was that of the province of Buenos Aires, when the governor Axel Kicillof and his Minister of Health, Daniel Gollan They updated the data processing method and, in this way, added 3,500 deaths from coronavirus in a single day. Later, the City of Buenos Aires adopted a similar criterion to adjust the information.

In search of more dollars, the Government launched a dialogue with mining companies to have a 30-year plan

After pressure from the governors, the Government enables negotiations for the eventual elimination of the PASO