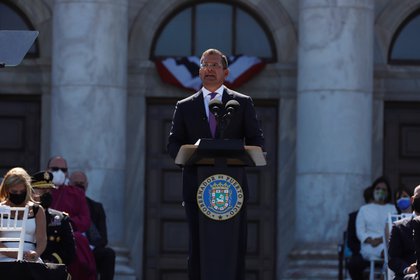 In the image, the governor of Puerto Rico, Pedro Pierluisi. . / Thais Llorca

San Juan, Jan 24 . .- The governor of Puerto Rico, Pedro Pierluisi, announced this Sunday an executive order to declare an emergency for gender violence, as he had advanced during his electoral campaign due to the situation that women live in the island.
The initiative responds to a social alarm caused by the increase in cases in a population such as Puerto Rico, of about 3.2 million people, where in 2020 more than 45 femicides were registered.
The social alarm was definitely unleashed after a period of four weeks between September 15 and October 19 of last year, there were 17 murders of women.
The decision announced today comes after her predecessor, Wanda Vázquez, announced a state of national alert for violence against women in September 2019.
“For too long vulnerable victims have suffered the consequences of systematic machismo, lack of equity, discrimination, lack of education, lack of guidance and above all lack of action,” he stressed.
DUTY AND COMMITMENT AS GOVERNOR
“It is my duty and commitment as governor to establish a STOP to gender violence and for these purposes I have declared a state of emergency,” said Pierluisi.
Executive order 2021-13 establishes specific mechanisms such as the appointment of a compliance officer, who will respond to the governor, to supervise, monitor and verify the implementation of the order.
In addition, it creates the Committee for the Prevention, Support, Rescue and Education of Gender Violence (PARE Committee) in which 17 members are appointed and increases to three the representation of organizations that are dedicated to fighting against gender violence.
This committee will be chaired by the Secretary of the Family, Carmen González.
Another of the provisions of the order orders the creation of a telephone application that helps victims of gender violence to request emergency help by hiding the message sent to protect the victim from their aggressor.
In addition, each agency in coordination with the Office of Management and Budget (OGP) will have to identify the resources to comply with the provisions of the executive order and, if necessary, request additional funds to handle the declared emergency.
VICTIM FOLLOW-UP PROGRAM
In an effort to prevent fatalities and provide greater safety to victims, a follow-up program is created so that anyone who has a protection order for gender violence is contacted by a public official to verify their safety.
Likewise, the establishment of training mechanisms for all public order agents and personnel of Government agencies relevant to the efforts of the PARE Committee is ordered, as well as the optimization of the processes to compile reliable statistics on the incidence of gender violence. .
The evaluation is also ordered to issue recommendations on the implementation of the Pink Alert Plan and it is ordered to explore ways to improve care for vulnerable victims through the specialized divisions of the Department of Justice.
Taking into account that on multiple occasions in cases of gender violence there is an economic factor that does not allow the victim to have the necessary tools to get away from their situation of violence, the executive order obliges the Department of Economic Development and Commerce (DDEC) to create programs that encourage the integration of women into the labor force.
To raise awareness, educate and prevent gender violence, the design and dissemination of media campaigns in alliance with private companies is instructed.
Finally, it is established that the PARE Committee must publish a first progress report within 45 days after the first meeting and every 30 days for the duration of the order, which will be until June 30, 2022, extendable by the governor to request of the PARE Committee.