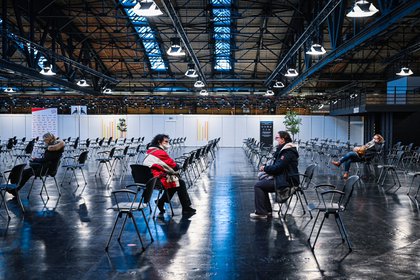 Vaccinated people wait to make sure they don’t have any side effects before leaving a COVID-19 vaccination center in Berlin on December 30, 2020. (Lena Mucha / The New York Times)

When members of the European Parliament met this month to read the first publicly available contract for the purchase of COVID-19 vaccines, they noticed something was missing. In fact, many things were missing.

And that contract, between the German pharmaceutical company CureVac and the European Union, is considered one of the most transparent in the world.

Governments have poured billions of dollars to help drug companies develop vaccines and are spending billions more to buy doses. But the details of those agreements remain mostly secret. Governments and public health organizations have acquiesced in drug companies’ demands to keep details secret.

Just a few weeks have passed since the vaccination campaign began, but that secrecy is already making accountability difficult. Pharmaceutical companies Pfizer and AstraZeneca recently announced that they would not be able to meet their delivery targets in Europe, causing widespread concern due to the spread of dangerous variants of the virus. However, the terms of their contracts remain closely guarded secrets, making it difficult to question company or government officials about responsibilities or solutions.

However, available documents suggest that pharmaceutical companies demanded and got flexible lead times, patent protection and immunity from being held accountable if something goes wrong. In some cases, countries are prohibited from donating or reselling doses, a ban that could hamper efforts to bring vaccines to poor countries.

Governments are signing at least three types of vaccine deals: some buy directly from drug companies. Others buy through regional bodies like the European Union or the African Union. Many will turn to the Global Access Fund for COVID-19 Vaccines (COVAX), an alliance of more than 190 countries that is buying from drug companies with the goal of making vaccines available worldwide – in especially in poor countries — free or at low cost. Some governments have signed agreements with both manufacturers and COVAX.

Despite the secrecy, a few government and regulatory documents, public statements, interviews, and occasional slip-ups have revealed some key details about the vaccine deals. This is what we know so far.

Developing vaccines is a risky endeavor. Companies rarely invest in manufacturing until they are confident that their vaccines are effective and can gain government approval. That’s part of the reason why they often take so long to develop and distribute.

To accelerate this process, governments – mainly those of Europe and the United States – and non-profit organizations such as the Coalition for Epidemic Preparedness Innovations (CEPI), absorbed part or all of this risk. .

The United States, for example, has pledged up to $ 1.6 billion to help Maryland-based Novavax develop its coronavirus vaccine, according to regulatory documents. CEPI provided up to $ 400 million in grants and interest-free loans.

Other companies have received even more help. The Massachusetts biotech company Moderna not only used government-developed technology as the basis for its vaccine, it also received close to $ 1 billion in government grants to develop the drug. Then, in August, the government placed an initial $ 1.5 billion order for the vaccine. The company has said that the project was paid for in full by the federal government.

These types of agreements are designed to help companies get manufacturing up and running and cover costs such as clinical trials. 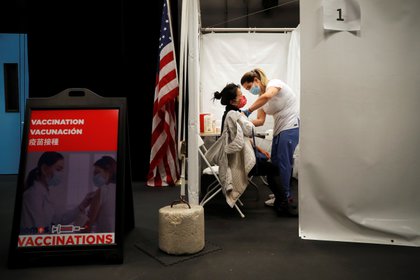 A healthcare worker administers an injection of the Moderna COVID-19 vaccine to a woman at an pop-up vaccination center operated by SOMOS Community Care during the coronavirus disease (COVID-19) pandemic in Manhattan in New York City, New York, United States, January 29, 2021. REUTERS

But companies will keep the patents

Despite huge taxpayer investments, pharmaceutical companies are typically full owners of the patents. That means companies can decide how and where vaccines are made and how much they cost. As explained in the CureVac contract, the company “shall have the exclusive right to exploit” those proprietary rights.

This has been a source of contention for months. A coalition of countries, led by India and South Africa, has petitioned the World Trade Organization to relinquish intellectual property rights so that generic drug makers can start producing the vaccines. The World Health Organization has endorsed this idea, but it has been practically condemned by the opposition of the United States and Europe, whose pharmaceutical companies claim that patents – and the profits derived from them – are the lifeblood of innovation.

“Governments are creating artificial scarcity,” said Zain Rizvi of the monitoring group Public Citizen. “When citizens fund the knowledge required to end a pandemic, that should not remain a secret.”

One of the key terms of vaccine contracts – price per dose – is frequently censored in public versions of government contracts. Companies consider it a trade secret. Some pharmaceutical companies have included clauses in their supply contracts that allow them to suspend deliveries if countries reveal the price.

By insisting that their prices remain confidential, manufacturers have the upper hand over government negotiators, who don’t know how much other countries are paying.

Although governments accepted that provision, some leaks and official reports show some of the disparities. According to media reports, the European Commission paid $ 2.19 for each dose of the vaccine developed by the University of Oxford and AstraZeneca, while South Africa paid more than double, $ 5.25.

Pharmaceutical companies did not respond to requests to see the uncensored contracts or explain why secrecy was necessary. A Moderna spokesperson limited himself to pointing out a regulatory document that said the contract “contains customary terms and conditions.”

That’s why there was such a stir last month when a Belgian official mistakenly revealed a price list, which showed that American taxpayers were paying $ 19.50 per dose of Pfizer vaccine, while Europeans were paying $ 14.70. .

Donations and resales are restricted

Public health activists have asked rich countries – which have practically monopolized the market for the first doses – to donate or sell vaccines to poor countries. However, the contracts could restrict buyers’ ability to export doses, which could reduce sales by pharmaceutical companies.

The CureVac contract, for example, prohibits European countries from reselling, exporting, or donating doses — even to COVAX — without company authorization. Some contracts in the United States have similar restrictions.

Vaccines will arrive when companies decide

Delivery times are considered proprietary information, so there are no public benchmarks against which to measure a company.

This has been most evident in the European Union’s fight with AstraZeneca over the company’s announcement that it would not be able to deliver the expected number of doses in the first quarter of this year. The European authorities claim to have received specific contractual guarantees for these deliveries. The company says it only promised to do its best to achieve those goals.

European officials, who initially agreed to keep the contract a secret, are now asking the company to make it public. Unless that happens, there is no way to determine who is responsible.

But there is no doubt that pharmaceutical companies have carved out a wide margin of maneuver for a launch as ambitious and complicated as this one. The CureVAc contract says that delivery dates (all censored) should be considered estimates. “On the estimated delivery dates there may be no product available or only reduced volumes of the product,” the contract says. Similar provisions exist in other contracts.

Almost all vaccine manufacturers have similarly told investors that they may not achieve their goals. “We may not be able to create or expand production capacity on time,” warned Pfizer in a corporate document in August.

That uncertainty has frustrated health officials. When Pfizer recently told Italy that it was temporarily reducing deliveries by 29 percent, the government said it was considering taking the company to court. If that lawsuit materializes, some details of the European Union’s contract with Pfizer could be made public, which remains completely secret.

“At one point they even promised more vaccines or faster vaccines,” said Steven Van Gucht, the Belgian government’s top virus expert. “And in the end they couldn’t deliver.”

Companies are protected from liability for damages

In the United States, drug companies are protected from almost any liability if their vaccines don’t work or cause serious side effects. The government protected drug makers to treat COVID-19 under the Public Emergency Preparedness Act, a 2005 law aimed at speeding up access to drugs during health emergencies.

That means that people cannot sue companies, even in cases of negligence or recklessness. The only exceptions are cases of proven “intentional abuse”.

Pharmaceutical companies are seeking similar disclaimers in negotiations with other countries. European negotiators have refused to grant such requests. COVAX also insists that countries accept full responsibility as part of their contracts.

The contract between CureVac and the European Union protects the company from much of the liability, but with several exceptions. Those exceptions are censored.

New variants of COVID-19 challenge vaccines: is the end of the pandemic further away?

What is the risk of contagion of COVID-19 in a classroom?