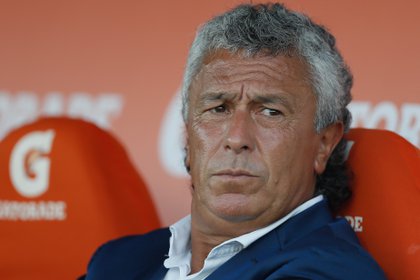 At a virtual press conference together with members of the Olympic board, Gorosito promised to “do everything in our power to try to become champions of the local tournament and to grow in international cups.” . / Juan Ignacio Roncoroni / Archive

Asunción, Nov 16 . .- Argentine Néstor Gorosito took over as Olimpia coach this Monday with the aim of “making the team grow” in the Copa Libertadores, a tournament that the most successful Paraguayan soccer team has won three times, but that has resisted him since he won it in 2002.
At a virtual press conference together with members of the Olympic board, Gorosito promised to “do everything in our power to try to become champions of the local tournament and grow in international cups.”
“That Olimpia go back to enjoying important things,” he added.
Gorosito replaces his compatriot Daniel Garnero, fired three weeks ago after the elimination in the group stage of the Libertadores, whose instance he cannot exceed for three years.
The bad start in the local Clausura tournament also weighed in the removal of Garnero, despite the fact that under his leadership the team won four consecutive local tournaments.
“It would be reckless not to recognize the great work that Garnero did, who has won four championships, and God willing that we can do it too,” Gorosito said.
The former coach of Tigre, and of the Spanish Almería and Xerez, also highlighted the task of the coach of the youth formations, Enrique Landaia, who after Garnero’s departure took over the squad and added three consecutive wins, with which Olimpia now shares the leadership of the Clausura with Nacional.
Likewise, he approved the promotion of Landaia of some players from the quarry in those meetings, and recalled that in all the clubs where he has been, he has resorted to many young values ​​”because they have earned it, not by imposition.”
“We have been lucky enough to direct several popular Argentine teams to River Plate, San Lorenzo, and the fact of coming to Olimpia for us is very important in our career,” reaffirmed the 56-year-old strategist.
The arrival of Gorosito comes after the president of Olimpia, Miguel Brunotte, weeks ago confirmed the signing as sports manager of Christian Bassedas, former player of the Argentine Velez Sarsfield.
“Olimpia is always obliged to have a competitive roster looking for the best possible success,” said Bassedas.
“There is time for Gorosito himself to examine the squad and we will emphasize the selective that Enrique Landaia is doing,” added the sports manager.
The contracts of Gorosito and Bassedas extend until December 2021 with the option to renew in both cases, explained President Brunotte, emphasizing that the management team he leads aims to achieve a competitive team “for an upcoming international cup.”
“This is a process and the key for us is always the sporting result,” said Brunotte, who replaced Marco Trovatto at the beginning of October after his ban for life by FIFA for attempted match-fixing.