The first time I knew of the existence of the Arecibo radio telescope was when, while still a child, I first read Contact, Carl Sagan’s novel. And I say I believe it because many years have passed, and I do not feel confident in claiming that it was actually mentioned in the book, and not just in the Robert Zemeckis film, which came out 12 years later, in 1997. Perhaps the memory of the book is mixed with that of the Arecibo message, fruit of a time in which human beings did not stop looking at the sky. A spirit that has partially endured, and that gave rise to projects like the much-remembered SETI @ Home.

Today the sciences advance that it is outrageous, which was said in La Verbena de la Paloma, but in some aspects, and due to a mixture of bad luck and neglect, sometimes we take steps backwards. This is what is happening with the Arecibo radio telescope, Puerto Rico, which will have to be demolished urgently, after clear signs of exhaustion of part of the materials of its structure, more specifically of the cables from which the receiver hangs, which is located about 140 meters above the 305-meter radius plate.

In order for the receiver to remain suspended over the dish, the radio telescope has three towers from which several steel cables come out to support it. But nevertheless, in August one of these cables broke, something that not only threatened the structural integrity, but also caused damage to the plate. At that time, those responsible for Arecibo began to work on replacing said cable, while some studies were commissioned on the general state of the infrastructure.

Everything seemed more or less controlled, until a few days ago, already this November, a second cable broke, a sign that in the absence of the one that was already broken in August, the infrastructure that supports the receiver was above its maximum capacity. A visual exploration of the remaining cables showed that, as expected, the remaining cables are breaking, endangering the radio telescope and, more importantly, the safety of all personnel working at the iconic Arecibo facility. . 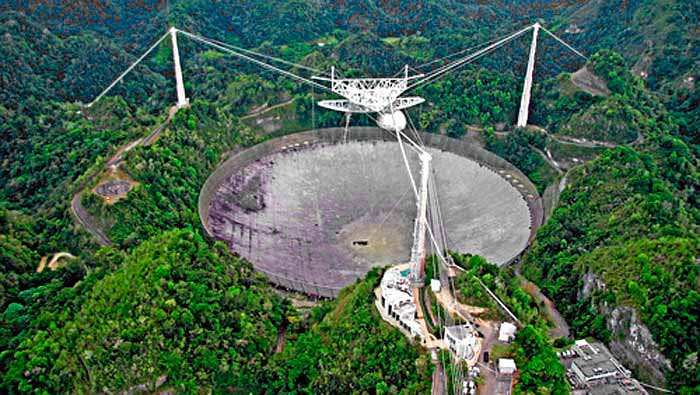 Since the break of the second cable everything looked pretty bad, and finally the agency responsible for the Arecibo radio telescope, The National Science Foundation of the United States, has confirmed that the radio telescope will be demolished soon, and in safe conditions for both the staff and the rest of the facilities that have operated, all these years, around the huge receiver. And it is that, as reported by the entity, its intention is that although the radio telescope disappears, the rest of the elements of Arecibo, such as the LIDAR with which the upper atmosphere and ionosphere are studied, continue to operate normally demolition completed.

What has happened in Arecibo?

Although the most important thing now is undoubtedly the safe demolition of the radio telescope, also an investigation of what happened in Arecibo will have to be carried out (and this is why he spoke of sloppiness at first). The reason for this is that it is assumed that periodic studies of the state of the infrastructure have been carried out, and none of those carried out until August of this year pointed to any problem with the cables. Put another way: based on those studies, this shouldn’t have happened.

It is true, and no one doubts it, that Arecibo’s weather conditions are harsh for certain types of materials and infrastructures, but this is a factor that we must take for granted that was taken into account in the aforementioned reviews. How is it possible, therefore, that not the slightest signal was detected? How is it possible that the first cable broke overnight, without giving prior signs of stress and fatigue? I am not saying that it is impossible, but I am saying that it is strange, and therefore I believe that the reliability of such periodic checks and, therefore, of those responsible should be evaluated.

And it is that, if these problems have been detected at an early stage, it would have been possible to replace damaged cables and take additional measures. Now, however, the Arecibo radio telescope must be demolished as soon as possible and in safe conditions, which is quite complex, since there are risks both that more cables will break and the receiver ends up falling, as well as that the remaining cables yes they resist, but due to the imbalance in the load distribution, it is the towers from which the cables hang that collapse.