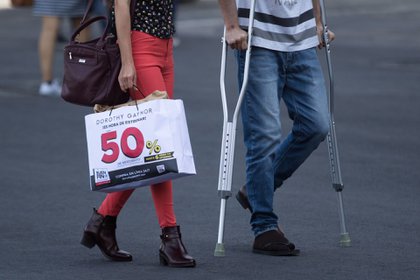 MEXICO CITY, NOVEMBER 15, 2020.- In some clothing stores and department stores in the Historic Center people were observed to enter, in what is the first Good End weekend, an initiative of the federal government and private initiative to offer attractive discounts to consumers. PHOTO: MOISÉS PABLO / CUARTOSCURO.COM

Like last year, Walmart supermarkets were the ones that received the most complaints in the context of the Good End. According to the operating results of the Federal Consumer Prosecutor’s Office (Profeco), Grupo Walmart accumulates 43% of all claims, 11 of which were not reconciled.

After Grupo Walmart, The suppliers with the highest consumer complaints in the framework of the Good End are Elektra (7%), Chedraui (3%) and Home Depot (3%).

Of the claims that reached Profeco on Saturday, November 14, the main ones have been for misleading advertising, with 14%, and for cancellation of the purchase, also accumulating 14% of the total.

Ricardo Sheffield also detailed that, through the Who’s Who in Good End Prices mechanism, 59 thousand inquiries have been resolved; further, Profeco has given 5 thousand 96 consultations and 215 telephone conciliations of which 75 are complaints in process. In this way, the conciliation percentage in claims directed to Profeco is 84%.

This year, with the aim of avoiding an increase in Covid-19 infections due to crowds of people in shopping centers, the Good End will have an atypical duration of almost two weeks. From November 9 to 20, different suppliers and stores will give offers and discounts to consumers hoping to boost the country’s economy.

This is why Ricardo Sheffield, through a videoconference, warned of a possible increase in complaints registered by Profeco compared to other years. This is since it is also expected that the attention to consumers will be given mainly through digital means such as the online stores of the different suppliers of products and services.

By October of this year, in the Consumer Magazine, Profeco had already identified Walmart as one of the suppliers for which more complaints have been reported in relation to the fulfillment of a guarantee. In that matter, Grupo Walmart takes second place with 17 complaints while Whirpool has the first with 27. After Walmart is Liverpool with 9 complaints, Samsung with 7 and finally Best Buy with 6 complaints. These data are regarding purchases made online during the year 2020.

Profeco also pointed out that there have been 4 ads withdrawn due to misleading advertising in which the Good End goes. In addition, the Products for which more complaints have been received are Clothes and Shoes (15%), screens (13%), White Line (11%) and Computers and Laptops (10%).

Regarding the best offers for this year, suppliers such as Sears Roebuck from Mexico in Oaxaca have stood out, where a discount of 23,299 pesos was applied to a Samsung brand washing machine, Liverpool de Monterrey with a discount of 21,198 pesos to a Hisense and Liverpool screen in Culiacán where the promotion to a Samsung refrigerator was $ 21,038.

Good End: these are the mistakes and “offers” that consumers took advantage of

Good End 2020: until when can you participate in the SAT millionaire draw