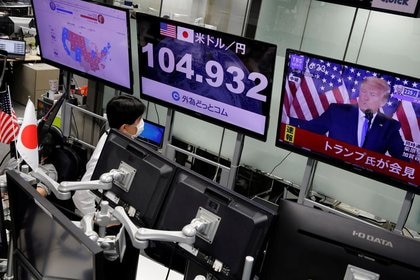 An employee of the asset firm Gaitame.com watches from Tokyo a speech by the president of the United States. November 4, 2020. REUTERS / Kim Kyung-Hoon

By Simon Jessop and Tom Westbrook

LONDON / SYDNEY, Nov 16 (.) – Global stocks were headed for record highs on Monday amid signs of economic recovery in China and Japan, recent strong corporate earnings and expectations of a vaccine distribution. COVID-19 that improved investor confidence.

* The MSCI index of world stocks rose 0.4% to 608.98 points, a short distance from the record it registered earlier in the month, helped by the strong advances of the main indicators in Asia and the opening to the rise of most of European stock exchanges.

* The general index of Asia Pacific stocks – which does not include the Tokyo indexes – reached its highest level since it was launched in 1987, after Japan emerged from recession and China released better-than-average industrial production data. provided. In addition, the region signed the largest trade agreement in its history.

* The positive trend of the stock markets was led by the European indices. The British benchmark FTSE 100 and the selective STOXX 600 for the region both advanced 0.7%.

* US equity futures indicated a similar start on Wall Street.

* “Futures (of New York stocks) suggest a rise of 300 points and the Dow Jones is poised to start the week at 29,770, eventually hitting the all-time intraday highs we saw at the beginning of last week” said Connor Campbell, a financial analyst at Spreadex.

* The prospects for an economic recovery were also helping oil prices, with both Brent futures and US WTI crude futures adding around 1%.

* But not all assets were pushed higher by the new ‘rally’, as the dollar fell slightly against a basket of rival currencies, affected by data released over the weekend on the accelerated increase in coronavirus infections in the United States and other parts of the world.

(Edited in Spanish by Marion Giraldo)