We are running out of qualifiers with the GIGABYTE AORUS XTREME. A solid state drive that looks like a graphics card that breaks all records for capacity and performance in a storage unit for consumer PCs. If you can afford it …

The secret of the AORUS XTREME Gen4 AIC SSD, which is the name of this development, are the eight AORUS Gen4 SSDs it includes. They are the most advanced units in the Taiwanese firm’s storage catalog and are mounted on a large board that is clicked into a PCIe 4.0 x16 slot.

Count with one special cooling system, a passive heatsink for each of the SSDs, another heatsink with aluminum fins for the whole and two generously sized fans. It has 10 temperature sensors that offer information in real time through software and allows you to select the speed of the fans, the chosen RAID matrix and other parameters.

If a single AORUS Gen 4 already offers great performance, imagine eight running at the same time. These solid state drives mount triple-layer 3D-TLC NAND flash memory and use an M.2 2280 format. They support the NVMe 1.4 protocol, TRIM and Smart functions, as well as 256-bit encryption for greater security and its controller, the Phison E18, is one of the most advanced for latest generation units.

The controller is key in these types of units and the new Phison is designed from the ground up and built on TSMC’s 12nm process node. The controller uses Phison’s proprietary CoXProcessor 2.0 technology, an SSD architecture that promises improved performance, power efficiency, AI-assisted storage, ultra-low latency, and a distributed architecture that uses many small cores to perform workload on parallel.

The storage capacity is tremendous when multiplying the 4 TB by the eight SSDs installed to total 32 Tbytes. In terms of performance level it is simply stratospheric, with sequential data transfer rates of 28,000 Mbytes per second. 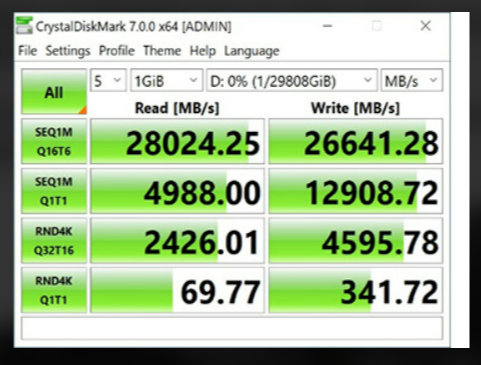 The price of this GIGABYTE AORUS XTREME has not been detailed, the highest performance for “consumption”, if any consumer can pay the thousands of dollars it will cost these types of cards.