Distribution of points in San Mamés under an intense and continuous downpour. Villarreal went ahead on the scoreboard, with a goal from Gerard Moreno, in his first shot on goal. Athletic finished more times, but he only managed to beat an inspired Asenjo with a bit of knowing how to be from Berenguer.

Each team played its tricks. Those of the sanctioned Emery, with the close European encounter, were well equipped in defense and only dared to leave behind with the five changes of rigor. Little time, in any case, to be able to aspire to achieve something more than a point in San Mamés.

The lions, on the other hand, insisted more at the offensive level and had their options, but they were losing steam as the 90th minute approached. Marcelino, unlike previous commitments, only made two changes and around the 80th minute.

The Asturian coach had introduced three game variations in his starting eleven. De Marcos entered the right-hand side by Capa and Iñigo Martínez and Dani García occupied the respective places of the sanctioned Nuñez and Vesga. The remaining eight were the same ones that came from thrashing Cádiz.

Emery, despite Thursday’s cup clash against Salzburg, also limited himself to carrying out three substitutions. Asenjo returned to the goal instead of Rulli, Foyth served as a right defender instead of Peña and Pedraza stood on the left wing with Estupiñán on the bench. The yellow players were located on the fast grass of San Mamés with the same system as the locals: 1-4-4-2. 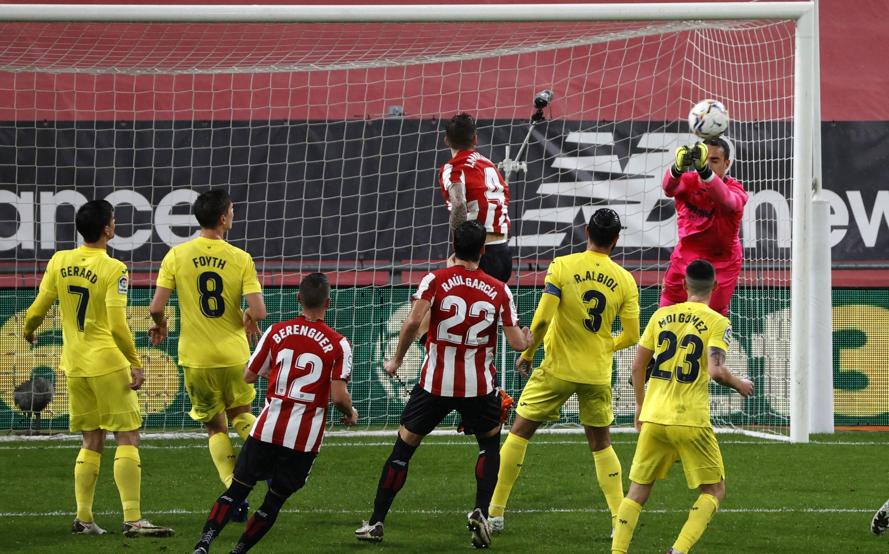 The lions pushed up the exit against a rival who did not flinch. Raúl García and Unai López tried their luck from outside the area. The first visitor arrival was much more effective. A good run by Pedraza and a loose ball that Gerard spliced ​​with a powerful shot that lightly brushed against Yeray. 0-1 at minute 16.

Villarreal, with an intensive withdrawal and combinations short in space and long in time, controlled an Athletic team that had not yet found the most suitable rhythm for their style of play without major stress. Yuri, Muniain and Raúl García, despite everything, did not stop trying and the insistence paid off very close to the break with a new goal, the third of this week, from a timely Berenguer, that this time he only had to push the leather to the bottom of the net.

Athletic intensified their pressure from the start of the second half. Villarreal, after a good arrival from De Marcos, responded with a shot from Pedraza, but from then on he stopped leaving his field. The yellows, despite the local dominance, knew how to keep the type in defense.

The lions, despite the problems they encountered when approaching the rival frame, did not cease in their efforts. Berenguer put Asenjo to the test before Emery pulled from the bench with the double change of Jeremy Pino and Fer Niño. Williams tried it with a header, but the yellow goal responded correctly again. Estupiñán also joined the game, a circumstance that led to Capa entering for De Marcos a little later.

The changes, with Jaume Costa and Chukwueze as the last bullets, improved a Villarreal that came out of the cave in the final stretch of the clash against Athletic, with Capa and Villalibre as the only refreshing men.

(+) See the summary of Athletic – Villarreal