During the Barclays Global Automotive conference, those responsible for General Motors exhibited a series of prototypes and models of unpublished models that appear to correspond to different design studies of future electric vehicles of the company. Among these were the SUV variant of the GMC Hummer EV and two mysterious Chevrolet models.

A few hours ago we showed you the first image of the new SUV variant of the GMC Hummer EV. This had been taken during the participation of General Motors managers in the Barclays Global Automotive conference, of which the numerous data revealed and even the audio of the speech of these executives had transpired, but not the video. In the following hours, new images of the event have appeared, in which in addition to the new GMC Hummer EV SUV that we already showed you, we can also see two other unpublished models.

These photographs have been appearing gradually in the last hours and although we now know that the original source was actually a streaming company, only a few fleeting screenshots remain of this transmission. Given its furtive nature, these are low resolution and somewhat blurry, so we cannot see in too much detail the models that appear, which are also in the background. 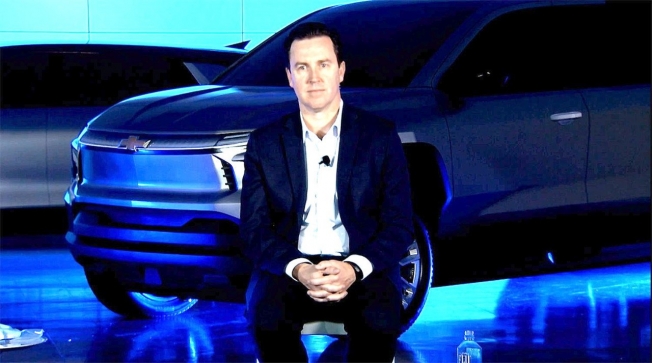 The first model is obvious, there is not much to explain about The future SUV variant of the new GMC Hummer EV. This has the same characteristics of the pick-up body variant but with the rear closed. But the case of the other two models is very different, because they show designs that we had not seen until now.

The model that appears in the center of the stage is very difficult to identify, because not only it looks too far away but also the low light does not allow us to see more details. At first glance it appears to be a mid-size crossover, so it could be both a Chevy and a Buick model. Well, according to GM’s new confirmed electric launch schedule, both brands will have new battery-powered crossovers. Although the only feature that we can identify, its front DRL optics, They are very similar to those of the Chevy pick-up who is next to him.

In the case of the vehicle on the right, it is much easier to recognize its features and the emblem that appears on the front, since it is a a full-size Chevrolet pick-up. The curious thing about this model is that it has features quite similar to those of the GMC Hummer EV pick-up recently presented. The front is totally new and does not really correspond to any known General Motors model or product line, but if you look at the side we discovered some wheel arches and rear pillar very similar to those of the new Hummer EV range. We know that there will be a large electric pick-up in the Chevrolet catalog and that it will use the BT1 platform and the Ultium powertrains of the new Hummer, what we did not know is that both would have similar features. The fact is that these models, including the Hummer SUV itself, are simple scale models, as betrayed by their dark windows or the wheels with small tires on the Hummer. So it is very risky to say anything for now.