During the recent Barclays Global Automotive conference, some of the heads of General Motors confirmed the details and news of its renewed electric vehicle strategy, considerably more ambitious thanks to a notable increase in the budget and which includes the launch of more models by 2025 in all the group’s brands.

Yesterday the Barclays Global Automotive conference took place, where some General Motors executives participated, including its own CEO, Mary Barra, where revealed many new features of their ambitious electric vehicle strategic plan. Among which we find the surprising announcement of the development of a second generation of the company’s Ultium batteries, when dealerships have not even arrived the first models that equip the first generation of this battery technology and mechanical assemblies.

As we already tell you in detail in a specific article, General Motors is currently developing and testing this new generation of batteries, which promises to be 40% cheaper than the Ultium batteries that will use models such as the Cadillac Lyriq or the electric Hummer range and up to 60% cheaper than those currently mounted in the Chevrolet Bolt EV. In addition, this new series of batteries will allow a greater range of reach, announcing a range ceiling of 724 km (450 miles). Which is not bad at all if we consider that all General Motors estimates are made based on the restrictive EPA cycle. 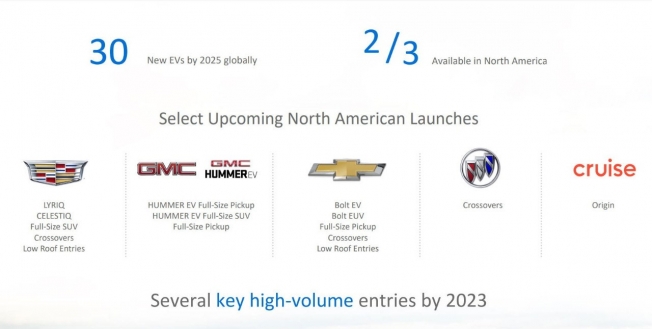 GM’s strategy for the electric segments has been gradually changing over the last few years, thus The figures and model launch announcements have danced a bit since the arrival of the Chevrolet Bolt in 2016. As confirmed yesterday by the executives of the US corporation, current plans include the launch of up to 30 new models between now and 2025.

Of these 30 models, 20 will be available in the North American market, although they did not give more details of any other specific market. But we can count that many of these products will be destined for the Chinese market and, probably, one of them is employed to return to Europe. Although this latest data has not yet been confirmed by the brand and comes only from our intuition, based on recent statements by various company executives, who assured that Europe is in GM’s medium and long-term plans.

As we can see in the list below, the company has even revealed the next launches of each of its brands, although without revealing the name of the models not yet presented or officially announced. So we only find the list of typologies to which these new battery-powered vehicles will correspond. Among the ones who we can highlight several crossovers and what the company calls “low roof models”, which we assume must be conventional or sports cars.