During the Barclays Global Automotive Conference, General Motors officials announced a new generation of Ultium batteries that will be ready shortly and that will increase the range of their models to a spectacular 724 kilometers on a single charge. This new generation of batteries will be installed in very different models and brands of the corporation in the middle of this new decade.

Several General Motors managers participated yesterday in the Barclays Global Automotive conference, where they took the opportunity to reveal a good number of novelties of its electric vehicle strategy for the next 5 years and several advances related to the technology of this type of vehicle, such as the Ultium batteries, which were presented just a year ago and although we still cannot find a single vehicle with this technology to the dealers , a new and improved generation is already in development that will be ready in a few years.

According to those responsible for General Motors attending said conference, among whom was Mary Barra herself, the corporation is going to allocate a budget of $ 27 billion for the development and launch of its next range of electric and autonomous vehicles in the next 5 years, which represents 7,000 million more than previously announced. These plans also include the development of an evolution of the Ultium powertrains that were presented several months ago and whose first models have just been presented in a conceptual way, so we have not yet found any vehicle on the market that uses the first generation of these. new batteries and electric motors. 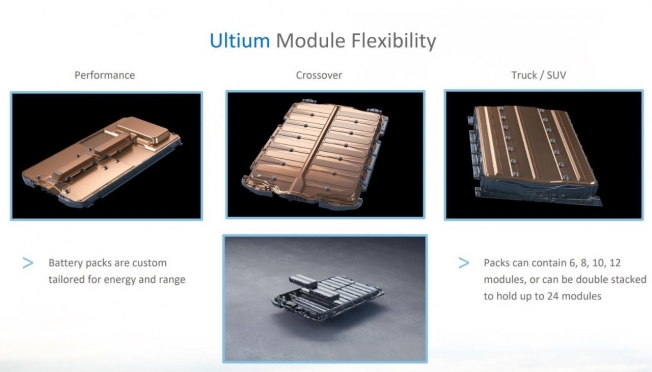 Different Ultium battery packs depending on the type of model.

“Climate change is real and we want to be part of the solution by putting everyone in an electric vehicle.” Mary Barra.

The new generation of batteries announced will represent a considerable improvement over those that the company is about to launch and which already had outstanding figures. The maximum autonomy confirmed for these batteries has passed from 400 miles (644 km) of the first generation to 450 miles (724 km) they announce for which they will be ready in the middle of the new decade. Among the different data revealed by the company we find that they will be much cheaper than those currently used by GM. Specifically, they will be 40% cheaper than the batteries of the current Chevrolet Bolt EV and up to 60% more than those that will mount models such as the Cadillac Lyriq or the future electric Hummer range.

These batteries they will be ready around 2025 and they will be the standard used by the company for all its electric models since then, from the smallest passenger cars to the pick-ups and full-size SUVs of all the brands in the General Motors portfolio.

Filtered out! First image of the future GMC Hummer EV with SUV body