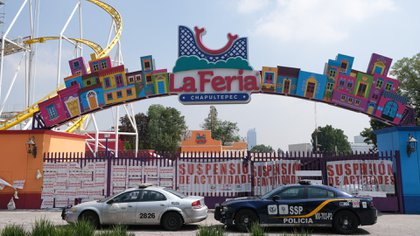 After the accident in which two people died, Civil Protection determined that all the games at La Feria lacked sufficient maintenance (Photo: Graciela López / Cuartoscuro)

The fairs and amusement parks with rides they are usually safe places thanks to the periodic controls and reviews carried out on the machines; however, sometimes there are failures that can cause serious injury or even death.

The accident of a young man this month in Six Flags Mexico It is under investigation by the Attorney General’s Office of Mexico City, and the events have not yet been sufficiently clarified, but there are other cases that remind visitors of amusement parks the precautions to be taken and the possible risks to tackle a mechanical game.

In November of last year in Saltillo, Coahuila, one of the participants of La Voz Kids suffered an accident in a fair game. The little singer Marian Lorette de León was at a kermesis at her school when her hair got caught in an amusement ride motor.

As a result of the incident, Marian suffered a detachment of part of her scalp, was taken to a hospital and initially reported as serious. After several surgeries, the little was discharged from the hospital and reappeared a month later in The voice Kids, although he could not proceed to the next round of “battles.” 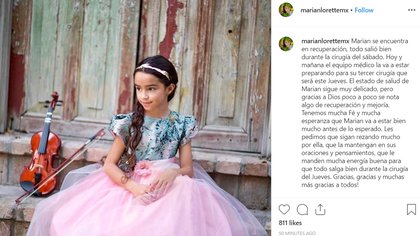 Months before the Lorette incident in Coahuila, two young people suffered a fatal accident at La Feria de Chapultepec From Mexico City. In fact, as a result of the event, the company Operadora de Desarrollo Humano Chapultepec lost the permission to manage La Feria and the park was closed for months.

It was in September 2019, when one of the most emblematic game carts of the Chapultepec Fair, Quimera, it broke off and fell to the ground. The vehicle was traveling at a speed of approximately 85 kilometers and its impact caused the death of two of its crew members, as well as injuries to at least five other people.

A month after the tragedy, Myriam Urzúa Venegas, secretary of Comprehensive Risk Management for Civil Protection of Mexico City, reported that all of the attractions at La Feria lacked maintenance. The official revealed that after a verification of the entire recreational park, a lack of general maintenance was detected, and explained that, according to the maintenance logs that were accessed during the investigations, the game Chimera practically it did not comply with 50% of the items and had “several omissions”, so the administration of the place must have stopped the game. 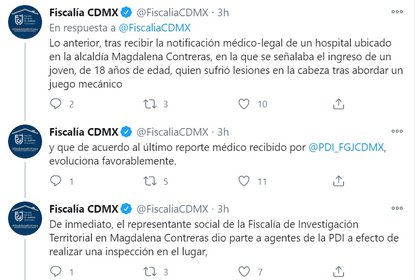 The accident of a young man that happened this month at Six Flags Mexico is under investigation by the Attorney General’s Office of Mexico City (Photo: screenshot)

On another occasion, in Pénjamo, Guanajuato, a 4-year-old girl died after falling from a 10-meter high game and suffering a head injury. Despite being hospitalized, the little girl did not resist. As reported by elements of the Audit of the Municipality of Pénjamo, the company did not have the corresponding permit to operate and the games had not been supervised by Civil Protection.

In fact, just a month earlier, at a fair allegedly operated by the same gaming company and in the same municipality, a 50-year-old woman lost her life after falling from the mechanical game known as El rosticero. One of the security bars broke just when the game was at its highest, with people upside down. Two women were hanged and subsequently fell to the ground. Only one could survive.

The young man who crashed at Six Flags “is evolving favorably,” reported the CDMX Prosecutor’s Office

The accident that shook Six Flags Mexico: a young man was shot out of the penguin, but they denied that he had died

Rotating and without individual seat belts: this is “El Pingüino”, the Six Flags game from which a young man shot