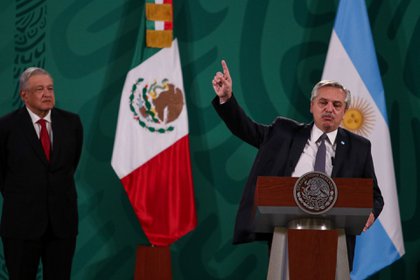 Alberto Fernández participated in the morning conference of Andrés Manuel López Obrador who, like every Tuesday, is dedicated to the report on progress in the face of the COVID-19 pandemic

(Special envoy to Mexico). Alberto Fernández was not satisfied with the defense of the ruling party in the case of the VIP vaccinated and designed a political offensive that he would execute during the press conference starring his host Andrés Manuel López Obrador (AMLO). In the same media movement, the The President wanted to separate those vaccinated who could defend and with silence condemn the friends, family and acquaintances who applied Sputnik V by the grace of Ginés González García.

In this binary context, where at no time did he acknowledge the error of not informing which necessary officials had been legally vaccinated, Alberto Fernández attacked the political opposition and the federal Justice that is investigating this probable case of public corruption.

“When I took note of what had happened, I reacted and lost a minister in whose ministry these things happened, under his dependence. I have read that they have made a complaint. The fact is already serious enough for a minister of the stature of Ginés (González García) to have had to resign. I ask the prosecutors and judges to stop the antics “, said the President at the press conference.

Likewise, Alberto Fernández appealed to his knowledge of positive law to affirm that the complaints would not prosper because there is no current criminal type that punishes the conduct of a person who is “ahead in line” to obtain Sputnik V.

However, the Criminal Code in its article 174 (paragraph 5) refers to “who commits fraud to the detriment of any public administration”, a legal norm that contradicts the political concept of “clowning” and that enables the possibility of investigating the alleged existence of the VIP vaccination center and the use made by Horacio Verbitsky on the recommendation of “his friend Ginés”.

González García, when he was Minister of Health, decided to give vaccines to a businessman from Mar del Plata and his family because he has known him for decades. And at the same time, he endorsed that a team from his ministry travel to Eduardo Duhalde’s house to vaccinate him. in situ.

To this reprehensible conduct, and subject to judicial investigation, must be added the performance in the shadows of Lisandro Bonelli – González García’s nephew – who invited his friends in Buenos Aires to apply Sputnik, despite the fact that they were not running any risk of death nor did they belong to the category of “essential workers”.

Alberto Fernández at a press conference in Mexico

When he finished questioning Justice, the head of state advanced against Together for Change. “There was a ruthless campaign by the opposition, unleashed to make Argentines feel that Sputnik V was poison. Now those who denounced me ask me to give them poison and get more poison. I would like Argentina to work in a different way, “said Alberto Fernández.

Alberto Fernández believes that he can win the elections in 2021 – and dream of his re-election in 2023 – if the vaccination plan works and the crisis of the VIP vaccinated remains encapsulated and with minimal impact on the proselytizing campaign. An electoral strategy that depends on many factors related to its public image and the actions of the federal Justice.

In this context, applying a zero-sum game, the President took advantage of the press conference to defend his position on the vaccine affair and question the administration of Mauricio Macri. Alberto Fernández can prove that he did not know of the irregular cases pushed by González and his nephew Bonelli, but the final trial will occur when the votes are added in October. 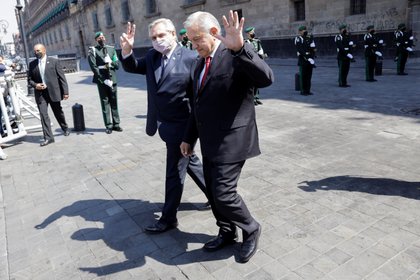 Apart from his criticisms of the federal Justice, the media and the opposition, Alberto Fernández made a political gesture that was praised in the Frente de Todos and within the national government itself. The President assured that Eduardo Valdes and Jorge Taiana, two legislators who applied Sputnik V, had not made any public error.

This opinion contradicts his decision to exclude them from the Mexico tour. If there was no public error, then why did Taiana and Valdes not travel in the official delegation that returns tomorrow to Buenos Aires. Taiana and Valdes, two political experts who know all the rules of the game, thanked Alberto Fernández for the positive mention, who already forgave them.

Along with the claim of Valdes and Taiana, the President defended Martín Guzmán without hesitation, that the vaccine was applied – with his closest staff – to be able to travel around the world and avoid a possible case of COVID-19.

Guzmán and his team negotiate with the International Monetary Fund (IMF), and the application of the vaccine – which occurred on January 29 – It was a decision that Carla Vizzotti made with the backing of Alberto Fernández. Guzmán was in a terrible mood last night and requested a public endorsement that today he got from the head of state himself.

The moodiness of the Minister of Economy was not only linked to the questions he received for appearing on the list of VIP vaccinated at Hospital Posadas. It happens that a direct relative was watching an open television program, and a journalist had flayed Guzmán because he had applied Sputnik without having the corresponding age or background.

Three hours ago, Guzmán appeared in the lobby of the Intercontinental hotel to receive Carlos Slim, a powerful Mexican businessman with significant investments in Argentina. The minister had already regained his smile, and so was his mother.