Berlin After scoring the goal that marked Eintracht Frankfurt’s 2-1 victory over Bayern Munich in the Bundesliga, Amin Younes decided to pay tribute to the victims of a racist attack.

The 27-year-old German winger with Lebanese roots ran directly to a gang, where he held up a commemorative T-shirt, which featured the name and portrait of Fatih Saraçoglu, one of nine people from immigrant families who were killed by a subject more than one year, in the nearby town of Hanau.

The Frankfurt players had warmed up for this Bundesliga duel wearing those jerseys with the names of the other victims: Ferhat Unvar, Hamza Kurtovic, Said Nesar Hashemi, Vili Viorel Paun, Mercedes Kierpacz, Kaloyan Velkov, Sedat Gürbüz, Gökhan Gültekin and Saraçoglu .

Younes, who did not stop haunting Bayern’s rear in the first half, was involved in a goal from Daichi Kamada in the 12th minute and scored the other at 31, for Frankfurt to strengthen in the search for the title. 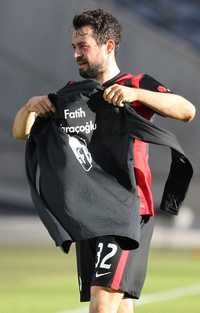 ▲ Amin Younes, after scoring the winning goal in Eintracht’s 2-1 victory, showed a commemorative T-shirt with the name and portrait of Fatih Saraçoglu, one of the nine people from immigrant families who were murdered by a subject more than of a year in Hanau.Foto Afp

Robert Lewandowski scored in the 53rd minute, but Bayern, leader of the classification and champion of the Club World Cup, chained their second game in a row without victory on matchday 22, in addition to the Covid-19 absences of Thomas Müller and Kingsley Coman and through injury to Serge Gnabry and Corentin Tolisso.

The setback could be taken advantage of by their rivals, RB Leipzig, who are second in the table to shorten the gap if they beat Hertha Berlin today.

Frankfurt thus consolidated its fourth place and its place within the Champions League zone by having seven points from the top, tied with Wolfsburg, which is third on goal difference.

Mainz won 2-1 on their visit to Borussia Mönchengladbach, who played their first game since announcing that their coach Marco Rose will leave for Borussia Dortmund next season.

Berlin Union won 1-0 in Freiburg, to overtake Gladbach on goal difference, Stuttgart won 1-0 in their visit to Cologne, while Dortmund thrashed bottom side Schalke 4-0.