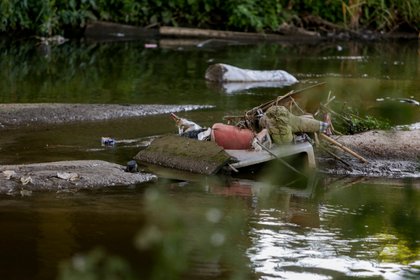 06/14/2020 Garbage and pollution in the Guadarrama river in the town of Arroyomolinos, where residues and waste have been recorded as well as its passage through the municipalities of M stoles and Navalcarnero, in Arroyomolinos, Madrid ( Spain) to June 14, 2020. POLICY Ricardo Rubio – Europa Press

The French Government has announced the processing of a legal reform to classify the crimes of “pollution” and “deliberate attack against the environment”, both considered “crime of ecocide”.

These crimes will be punished with between 375,000 and 4.5 million euros in fine, in addition to prison sentences. For the crime of contamination, penalties of between three and ten years in prison are contemplated. In the case of “deliberate attack against the environment”, the penalty will be one year in prison and a fine of 100,000 euros.

“Today there are those who choose to pollute, because it costs them less than cleaning. This is going to change (…). I hope we are extremely dissuasive,” said the Minister of Justice, Eric Dupond-Moretti. “Before, we polluted, we didn’t pay. Now, we pollute, we pay ten times more than we thought we would save,” he highlighted.

The Minister of the Environment, Barbara Pompili, and the Minister of Justice, Eric Dupond-Moretti, have published a joint column in the newspaper ‘Le Journal du Dimanche’ explaining the initiative, included in the list of 150 measures proposed by the Citizen Convention of the weather.

To enforce these new texts, Eric Dupond-Moretti envisages specialized environmental courts in all appellate courts and granting the status of judicial police to biodiversity agents.