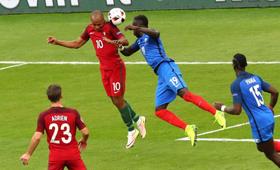 France sealed their ticket to the UEFA Nations League ‘Final 4’ thanks to their 1-0 victory over reigning tournament champions Cristiano Ronaldo’s Portugal this Saturday in Lisbon.

N’Golo Kanté, in the 53rd minute, was the author of the goal of the world champion’s classification, which reached the duel with the important loss of the injured Kylian Mbappé, who followed the game from the stands.

The Portuguese team, second in their group, will not be able to defend the title they won in 2019 in the first edition of this recently created competition.

France, with 13 points, is already sure to finish leader of group A3 of the Nations League.

Portugal is second (10 points) with a match to go to the end, but they can no longer beat the Gauls in the standings due to the results in the private duels between the two. In the first round they had drawn 0-0 at the Stade de France in Paris.

The clash between the Portuguese and the French was decisive, since the winning team kept the ticket for that ‘Final 4’. A draw would have postponed the outcome until Tuesday, when both teams will play the last day, France against Sweden and Portugal in Croatia.

France will arrive at that match with the mission accomplished and after having taken revenge on Portugal, the team that beat them in Paris in the final of Euro 2016.

Didier Deschamps’ team significantly improved its image after a disastrous game lost 2-0 to Finland in a friendly on Wednesday.

Already in the first half, France had the best chances and touched the goal in several moments.

The first dangerous approach was in 10, with a shot by Kingsley Coman that Rui Patricio stopped, who later saved his team, in 12, in a heads-up in which Anthony Martial could not beat the Portuguese goalkeeper, who cleared with one foot.

Martial himself sent the crossbar on 30, in a header and in 41 he returned to touch the goal with a shot from the front of the area, a pass from Lucas Hernández. Rui Patricio again avoided the goal of the ‘Bleus’.

Portugal was relegated to trying counter-attacks, without great options.

His best chance before the break was Cristiano Ronaldo, heading off a corner kick, but the Seleçao star was unsuccessful.

In the second half the prize came at the insistence of the French. It was in 53, when a shot from Adrien Rabiot was cleared by Rui Patricio and the rebound went to Kanté, who pushed the home side at will.

Portugal tried to react and José Fonte sent the head post, in 59, and in 75 Hugo Lloris stopped a strong shot from Joao Moutinho

In addition to the defeat and running out of ‘Final 4’, Cristiano Ronaldo was also left without scoring and, with 102 goals for Portugal, he is still seven behind the record for goals in national team matches, held by Iranian Ali Daei.