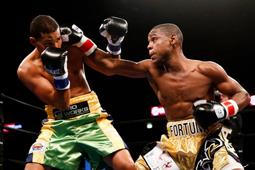 Former world champion Javier –El Abejón- Fortuna knocked out Mexican Antonio Lozada Torres in the sixth round in the main event of an evening held at the Staples Center, in Los Angeles, and broadcast internationally on FOX.

The native of La Romana and who is looking for a chance that will lead him to a third universal crown, deployed an attack in bursts of blows that from the first round paid off, taking the lanky Aztec rival to the canvas.

At the height of the second chapter, the former titleholder of the featherweight and lightweight Jr. categories (126 and 130 pounds respectively), suffered a face injury after an accidental head butt.

Fortuna, a 31-year-old left-handed guard, never felt respect for the mark of 40 wins, 34 by knockout, 4 losses and a draw, worn by Lozada Torres, owner of an obvious reach and a height of 6 feet, scarce in light weight.

The Dominican maintained his onslaught in combinations of five and up to eight strokes, having to resist the Mexican’s response in chapters 4 and 5 without major problems.

At the end of the sixth round, the former double universal champion and official challenger of the World Boxing Council, made a target with a right to the head and launched a lightning offensive that forced referee Gerard White to stop the actions when 2:34 had elapsed in the chronometer.

Fortuna’s record rose to 36-2-1 and he is enjoying one of his career highlights with a streak of three major wins against Sharif Bogere, Jesús Marcelo Andrés Cuellar and his demonstration against Lozada Torres last night. These triumphs place him at the door of a title fight either against Teofimo López, unified king of the WBA, IBF and WBO; or failing that, against Devin Haney, WBC champion.

His manager César –Mangüita- Mercedes revealed to LISTIN DIARIO that in the next week the “luck” of Fortuna could be decided, since the unified champion López could rise to the 140-pound division and leave his crowns vacant or the WBC force Haney to a mandatory fight against the Roma.

“This result forces the WBC to make a decision with -Abejón Fortuna; but he is ranked in all organisms and if Teofimo raises or abandons one or all of his titles, he would also be available to go to a tie, “said Mercedes.