Red Bull hold the world record for the fastest pit stop in Formula 1, which stands at 1.82 seconds

Formula 1 rule makers have introduced a minimum reaction time for key moments because of concerns some teams are using automated release mechanisms.

Horner said he believed rivals had deliberately targeted his team.

“If you can’t be beaten, then the most logical thing is for your competitors to try and slow you down,” he said.

Red Bull regularly have the fastest pit stops and are consistently faster than title rivals Mercedes in that area.

Mercedes team principal Toto Wolff admitted his team had made an inquiry to governing body the FIA about pit stops but said it was in reference to their own procedures.

“We inquired with the FIA on a safety mechanism, which is related to a system that we were using, and whether that could be optimised,” Wolff said. “That happened, I would say three or four weeks ago. And it was a technology question.

“So did that trigger anything else? Maybe. I don’t know. But this is the question we’ve asked.”

The FIA issued a technical directive before this weekend’s Styrian Grand Prix at Austria’s Red Bull Ring which comes into force at the Hungarian Grand Prix on 1 August.

It mandates a minimum 0.15-second delay between the wheel nuts being confirmed as tight and the mechanic operating the jack dropping the car, and 0.2secs from the jack going down to the driver receiving the signal to leave the pits.

The rules say that both situations should be triggered manually, but some teams had what one senior figure described as “strong suspicions” that rivals had systems that were fully automated within the pit-stop equipment. 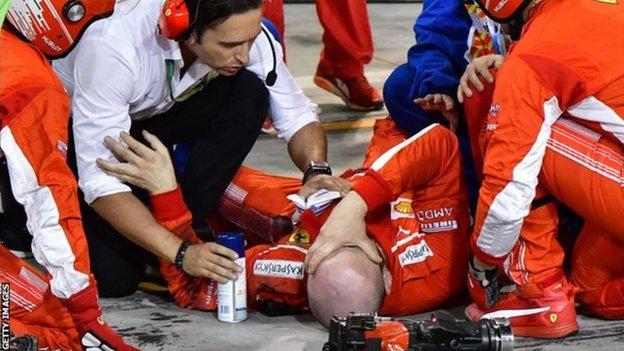 Ferrari were fined 50,000 euros by race officials for an unsafe release at the Bahrain Grand Prix in 2018

An FIA spokesman said: The key point is that this is a proactive safety update, building in some required latency into the procedures in order to ensure the decisions are being taken by the equipment operators rather than being automated, and thus to protect the pit crews from incidents similar to the one seen in Bahrain a few years ago.”

This is a reference to an incident in which a Ferrari mechanic suffered a broken leg when Kimi Raikkonen was released too early from a pit stop in Bahrain in 2018.

Horner said: “To have to hold the car for two tenths of a second, you could almost argue it’s dangerous because you’re judging your gaps.

“The guy that’s releasing the car is having to make that judgement, and I think that it’s not been well thought through.

“F1 is about innovation and competition. Seeing pit stops sub two seconds is a remarkable feat and we should be encouraging it, not trying to control it, otherwise where does it stop?

“We’re going to be told which way to walk into the garage, where we should sit on the pit wall, and which buttons we should press I guess.

“I find it a little disappointing. It’s the duty of the competitor to ensure that the car is safe, and the penalty for a wheel not being fixed is you have to stop the car immediately.

“So it’s a brutal punishment, if you haven’t got all four wheels securely and safely fastened. So what the technical directive is trying to achieve, I’m not quite sure because I think there’s an awful lot of complexity to it.

“Safety for our pit crew is one of the most important things for us as a team,” he said.

“It’s such a very competitive battlefield in F1, and therefore I think it is good to clarify even further of what the FIA is expecting in order to be within the rules.

“One reason why we welcome the initiatives on FIA side, is it’s important also to anticipate problems or safety issues, and not always wait until they happen and then react.”

Both followed claims that Red Bull had been finding legal ways to run their car in a manner that was not intended by the rules.

Horner said: “You can see there’s an awful lot of pointed activity in our direction in the moment. That comes with the territory of being competitive.

“An awful lot of energy is going into trying to slow the car down which is what obviously happens in a competitive business. It’s something we’re used to but I’m not losing too much sleep about it.”