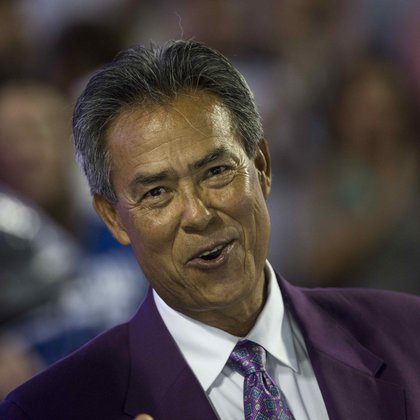 Managua, Jan 22 . .- Former Major League Baseball pitcher, Dennis Martínez, met with different opposition groups from his native Nicaragua, with the aim of lobbying the possibility that they unite, to confront the Government of Daniel Ortega, in the framework of the elections next November, reported this Friday the Nica-USA Connection movement.
“As a platform in the United States, Nica-USA Connection is committed to the Nicaraguan people to contribute to the formation of a broad unity that will confront the regime and thus return us to the path of a democratic Nicaragua, where the law and the State of Right, “said the movement chaired by Martínez.
Nicknamed “The President” in Major League Baseball (MLB), Martínez, who resides in the United States, has criticized Ortega for his reaction to the 2018 anti-government protests, which left hundreds of people dead, imprisoned or missing, thousands of injured, and tens of thousands in exile.
The movement that leads Nicaragua’s greatest sports icon after the late boxer Alexis Argüello reported that its members held “separate meetings” with the dissident movements National Coalition, Civic Alliance for Justice and Democracy, and Citizens for Freedom (CxL).
“We have agreed (…) that Nicaragua needs many factors, among them unity, in addition to electoral changes that guarantee the legitimacy of the vote through free, transparent and observed elections by international organizations,” said the Nica-USA Connection.
Calls for the opposition to unite against Ortega became more intense as of last week, when the president of CxL, Kitty Monterrey, disqualified the National Coalition and the Blue and White National Unity, and declared that only her party and the Civic Alliance are opposition.
Until 2018, “El Presidente” Martínez, the second most successful Latino of all time and the first to throw a perfect game in the Major Leagues (1991), was an enthusiastic collaborator of President Ortega on sports issues, just as he had been with the Nicaraguan rulers who preceded the Sandinista.
In October 2017, Martínez launched the first ball of the modern National Stadium of Nicaragua that bears his name, and which was designed to play baseball, the most popular sport in this country.
The relationship between the two “presidents” broke down in 2018, when the “Dennis Martínez” National Stadium was identified as a “concentration” center for armed police and civilians who, according to the Inter-American Commission on Human Rights (IACHR), shot and killed hundreds of people protesting peacefully against Ortega.
The elections on November 7 will be crucial for Nicaragua, since it depends on Ortega extending or concluding 14 consecutive years in office, in addition to the 11 years that he governed between 1979 and 1990, and 42 years of dominance of politics. local.
Opponents believe that if they unite as a single force, they will be able to repeat Violeta Barros de Chamorro’s victory in 1990, when Ortega was first defeated at the polls.