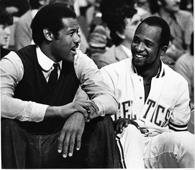 Duerod had been battling leukemia for seven months and was transferred to hospice last week, according to The Detroit News.

Duerod played for legendary coach Dick Vitale in Detroit from 1975 to 1979, where he averaged 15.2 points and 2.5 rebounds per game. He racked up nearly 1,700 career points there and helped lead the Titans to their first NCAA tournament victory in 1977, Vitale’s last year as a coach there.

Duerod was selected by the Pistons in the third round of the 1979 draft. He then spent the beginning of the 1980-81 season with the Dallas Mavericks before being traded to the Boston Celtics, where he helped lead them to a title.

“It is very sad to hear about the passing of Terry Duerod,” Vitale said, via the Associated Press. “He is one of the really special players at the university. I am absolutely devastated. I found out from a phone call from his wife this morning that he had passed away from cancer.

“He was unique. He was Mr. Emotion. When the ball was in his hands, the crowd was frantic… His range was the minute he left the locker room. I’m telling you, if there was a 3-point line during that era, he would have put in points at an amazing rate and his stat totals would be much higher than they are. “