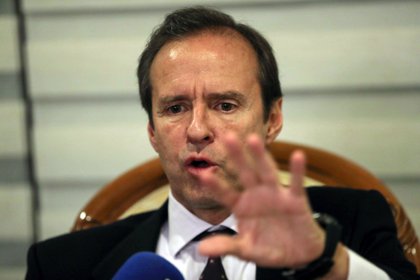 In the image, the former president of Bolivia Jorge Quiroga. . / Martín Alipaz / Archive

Miami, Nov 17 . .- Former Bolivian President Jorge “Tuto” Quiroga regretted this Tuesday in a forum on democracy held virtually from Miami that neither Brazil nor Mexico have yet recognized the president-elect of the United States, Democrat Joe Biden, and He noted that even China has.
“I have never seen a transition where Biden had not been recognized by the giants of the hemisphere: Brazil and Mexico,” Quiroga said during the V Presidential Dialogue, in which eleven more former presidents from Latin America and Spain participated. “Even China has already recognized,” he added.
“This is going to create problems for the development of the hemisphere,” Quiroga emphasized.
For his part, former Chilean President Eduardo Frei considered “good news” that Biden had won the elections for President Donald Trump on November 3.
“The crises of democracies are solved with more democracy and more participation, and the people of the United States give a clear signal that they did not want to continue with the government that was in,” added the former Chilean president.
Frei criticized that the governments of Latin America are not integrated and that this has been evidenced during the covid-19 pandemic in which they fight even over the fans.
In that sense, he said that in the face of the blocs in Europe and Asia, the “logical” path for Latin America is to integrate with the United States, for which he applauded Biden’s victory.
At the forum, which this year was to be for the first time in Madrid (Spain), the former presidents discussed the worsening of threats to democracies due to the pandemic in the region.
Only Quiroga and Frei briefly referred to the elections in the United States, where Republican Trump has refused to concede victory to Biden, arguing electoral fraud without presenting evidence.
Frei said that he hopes that “the Biden presidency” with another “charisma” is good news for the reactivation of the region, “which has not been able to integrate” with each other.
“We are in a globalized world and what happens in any part of the world affects us,” he said during the event, organized by the Democratic Initiative of Spain and the Americas (IDEA).
He regretted that Latin America is the continent most affected by the coronavirus, with six countries among the first places by number of cases, and “of course the United States, which does not escape from that reality.”
The former Chilean president pointed out that even Africa surpasses the American continent in handling the covid-19 pandemic.
The forum, which is usually held at Miami Dade College (MDC) in this Florida city, is organized by the Mezerhane Chair at the MDC.
This year had the virtual participation, from their countries, of a dozen former presidents of Latin America and Spain, among them, Jamil Mahuad and Osvaldo Hurtado (Ecuador), Luis Alberto Lacalle Herrera (Uruguay) and Andrés Pastrana (Colombia).
Also present were former presidents José María Aznar (Spain), Ernesto Pérez Balladares (Panama), Laura Chinchilla and Miguel Ángel Rodríguez (Costa Rica), Felipe Calderón (Mexico), and Mauricio Macri (Argentina).