Because the recent edition of the SEMA Show has been purely virtual, Ford has decided to create several special prototypes that will be unveiled during a few days that have been called ‘Ford Auto Nights’ SEMA Show Special. Among these modified models we can highlight an attractive Bronco Badlands Sasquatch concept.

Like so many other events, the traditional SEMA Show in Las Vegas could not be held this year, although the organizers of the Las Vegas Convention Center They decided to create a practically identical show but without an audience that was called SEMA360 and which was broadcast online earlier this month. In parallel to the event itself, some manufacturers such as Ford have decided to organize their own initiatives to give more visibility to some of the products they had prepared for the Las Vegas event.

This American company event Named ‘Ford Auto Nights’ SEMA Show Special and it will take place virtually on Thursday and Friday of this week. So on those days we will attend the online presentation of several models of the blue oval signature. 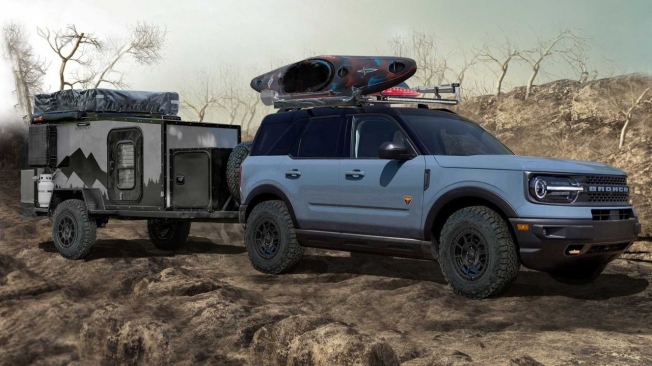 The new Ford Bronco Sport also has a modified version.

At the moment the information we have on the models that the Dearborn firm ‘Ford Auto Nights’ SEMA Show Special has prepared is very scarce and it is limited to how little we can see in the different images that he has presented as a teaser. Although some have limited themselves to showing only a series of sketches of the model, as is the case with the most interesting piece of the lot, a slightly modified Ford Bronco Badlands Sasquatch Package.

This example of the Bronco corresponds to the 2-door variant and It has the elements of the optional Sasquatch Package, as is the case with the huge set of wheels with 35-inch diameter Goodyear gravel tires. Although it also has some customization touches, such as the perforated U-shaped doors, the front bumper with winch, the upper auxiliary lights or the various details in orange. Being simple sketches we cannot be sure if the model has more modifications, but it will surely mount a good number of accessories.

In addition to this example of the Ford Bronco we also find a prototype of the Ford F-150 that serves as a basis to show the New optional electric generator available at all dealerships brand, plus a slightly modified Ford Bronco Sport and Ford Ranger Tremor with numerous leisure accessories.