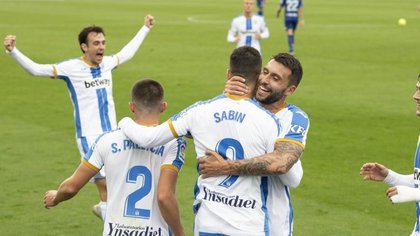 CD Leganés won by the minimum (1-0) in the derby against Alcorcón within matchday 12 of LaLiga SmartBank, three points to establish their position in the ‘playoffs’, while Logroñés achieved their fourth consecutive victory by overcoming ( 1-0) to Sabadell.

In the morning session, Butarque again showed his team more effective than showy, but with 22 points in fourth position. The ‘cucumber’ team does not finish working but knows how to get the matches, this time with a goal from Sabin Merino at the time of the duel.

To the thick of the premises were added the good intentions of an Alcorcón where Juan Antonio Anquela made his debut. The technician, back to the ‘potter’ team eight years later, could not avoid another defeat for the bottom player, seven points from salvation.

On the other hand, Logroñés once again demonstrated its defensive strength and effectiveness at key moments to find itself two points from the promotion zone. The duel between newly promoted was chosen by the good local defense, the third game without conceding, and the goal of Leo Ruiz in the 83rd minute in Las Gaunas.

The other two promoted this season were also mentioned in another direct duel that Castellón won against Cartagena (2-1), three points of life after six defeats in a row. Meanwhile, Málaga could not (1-1) with Ponferradina in their attempt to get into the noble zone, one point behind sixth.

The day was closed by the Canarian derby in Gran Canaria, where the local team won six years later in the league. Las Palmas approached that ‘Top 6’, two points behind, with a 1-0 win against Tenerife due to a tremendous error and an own goal from goalkeeper Ortolá. The visitors took a long time to forget the failure, but they had the draw.

– RESULTS OF THE DAY.