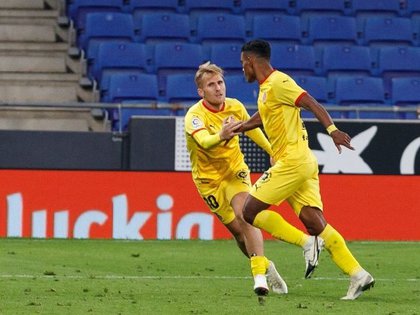 11/20/2020 Football / Second.- (Chronic) Girona stops Espanyol with an express comeback. Girona gave the surprise this Friday after defeating the imposing Espanyol at the RCDE Stadium (1-2) thanks to an express comeback starring Yoel B rcenas and Samu Saiz, authors of the goals, in the last seven minutes of a match belonging to matchday 13 in the SmartBank League. SPORTS LALIGA

Girona gave the surprise this Friday after defeating the imposing Espanyol at the RCDE Stadium (1-2) thanks to an express comeback starring Yoel Bárcenas and Samu Saiz, authors of the goals, in the last seven minutes of a match belonging to the Matchday 13 in the SmartBank League.

The team led by Vicente Moreno, the undisputed leader of the category, has put such a condition into play with the second defeat of the entire championship, the first at home. The parakeets took the lead in the first half with a goal from top scorer Raúl de Tomás, but Girona’s reaction in the final stretch was sensational.

Despite the multiple casualties of Francisco’s team, Girona ended up scoring the Catalan derby thanks to the response of Bárcenas, in the 83rd minute, and Samu Saiz, who transformed a penalty close to ’90, to place his team looming to the ‘playoff’ positions in the absence of a remaining game.

For their part, Alcorcón won again after nine consecutive defeats after beating Lugo (1-0) with a goal from Marc Gual with eight minutes to go. Those of Anquela, who achieved their first triumph with the potters, ended up asking for the time, especially after Sosa’s expulsion a few minutes to go.

The locals were very organized throughout the match until they found their moment with Marc Gual’s cross shoe. The yellow striker took advantage of an error by Lugo in the exit of the ball to establish the final 1-0. The Galicians see their trajectory slowed down (they had 17 of the last 21 points) and Alcorcón will continue as bottom although they cut three points in their goal of salvation.