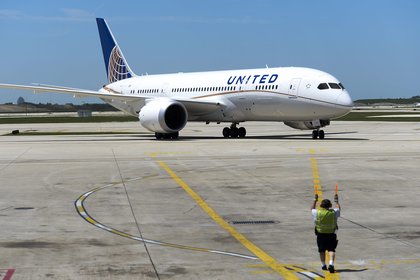 From this Monday until next December 11, United Airlines will carry out, for some flights, rapid coronavirus tests before boarding. . / TANNEN MAURY / Archive

New York, Nov 16 . .- United Airlines flights between the airports of Newark (near New York) and Heathrow, in London, in which passengers are forced to take a free coronavirus test began this Monday , with which the company intends to test a new security system to boost air travel.
From this Monday until next December 11, the airline will carry out, for some flights, rapid coronavirus tests before boarding, to which all passengers on board this transatlantic trip will have to submit, except children under two years of age. .
Anyone who does not want to undergo the test must travel on another United Airlines flight between those two airports where the test is not required.
Passengers on these special flights, which are being tested, must take the quick test three hours before takeoff.
The analyzes, which will be carried out by the Premise Health company, will be carried out on the flight that departs from Newark, located in the state of New Jersey but which, due to its proximity to New York, also serves the Big Apple, on Mondays, Wednesday and Friday at 7.15pm local time.
The start of these flights comes a week after this airline announced that it will disinfect airport terminals to help prevent infections in the US, which have been in record numbers.
Specifically, he pointed out that it will use an electrostatic spray in 35 of its busiest airports, both in the check-in areas and the flight access terminals themselves, something that will start doing several times a week and then at the beginning of December to do it each night.
United already established a similar system on the national flight that connects San Francisco and Hawaii on October 15, but, in this case, charging for the tests.
This system allows travelers who have tested negative to avoid the quarantines imposed by the authorities of the destination cities.
According to United, between October 15 and 25, flights of this type between San Francisco and Hawaii experienced a 95% increase in passengers compared to the previous two weeks.