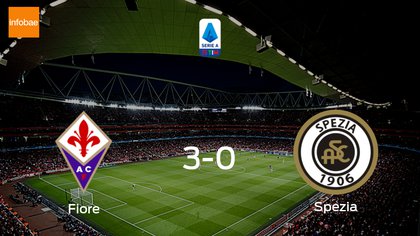 Fiore consolidated a great victory after thrashing 3-0 to Spezia during the match played in the Artemio Franchi this Friday. Fiorentina arrived with the intention of returning to the path of victory after suffering a 2-1 defeat in the previous duel against Sampdoria. Regarding the visiting team, Spezia Calcio won AC Milan at home 2-0 and previously also away from home, against Sassuolo by 2-1. After the result obtained, the Florentine set is sixteenth, while Spezia It is thirteenth after the end of the match.

The second part of the match started in a favorable way for Fiorentina, who took the opportunity to open the scoring with a goal from Dusan Vlahovic a few minutes after the resumption of the game, specifically in minute 48. The Florentine team joined again, increasing distances through a goal of Gaetano castrovilli in minute 64. After this, a new occasion allowed to increase the score of the local team, which increased distances by making it 3-0 with a goal of Valentin eysseric in minute 82, thus closing the confrontation with a final score of 3-0.

In the match the referee cautioned with four yellow cards only to the home team. Specifically, a yellow card was shown to Sofyan amrabat, Valentin eysseric, Borja Valero Y Lucas Martinez.

With this brilliant display Fiorentina it rises to 22 points in Serie A and remains in sixteenth place in the standings. For its part, Spezia Calcio remains with 24 points with which he faced this twenty-third day.

The team that played the game at home will be measured on the following day with Udinese, while Spezia Calcio will play against Parma.