This appears to be the first leaked image of the new SUV body variant of the GMC Hummer EV. A blurry photograph that clearly shows a prototype or full-scale model of General Motors’ new electric SUV.

The new GMC Hummer EV pick-up has been one of the most media launches of General Motors in recent months. This mammoth electric off-road vehicle is the top of the new range of battery-powered models of the brands of this American corporation, if we except Cadillac, whose electrical products are going to have a somewhat more luxurious and technological character.

However, despite the media bombshell that the rebirth of the Hummer brand has meant, which has now become a product range rather than a separate brandUntil now, only one body variant, the open rear cradle pick-up, has been officially presented. The image that heads these lines It is the first that we can see of the future SUV body variant that will accompany the pick-up at the brand’s dealerships in North America. 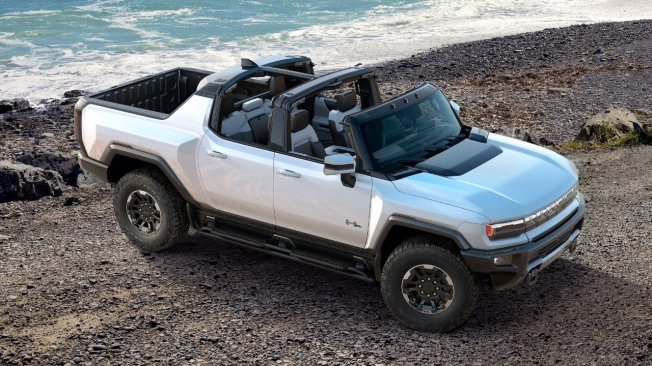 The origin of this first filtered image is uncertain, but our sources assure that it is a real image of the model and that it has been shared on the network for hours. From what little we can see it is really an initial prototype or, more than likely, a full-scale model of the SUV. Since the crystals appear completely painted black, as is usual in this type of models or primitive prototypes without interior. Another detail that makes us think that we are facing a simple model are the wheels. The rims are similar but not the same as those of the GMC Hummer EV pick-up and the off-road tires have a lot of relief but an extraordinarily low profile for a 4×4 of this size and weight. These are notably smaller than those mounted on the prototype of the Hummer EV pick-up already presented.

Whether it’s real or not, the truth is that this image shows exactly what we expected to see from the closed body variant of the new GMC Hummer EV. In fact, it is practically identical to the recreation of this variant that we showed you last October. Which really makes us a bit suspicious, since the resemblance with the different renders that we can find on the internet is very great. In the front area we do not find changes with respect to the pick-up variant that we have already seen, but if we look at its rear half we find a considerably narrower C-pillar leading to a large side window. Unfortunately, the photo has very low resolution, it is somewhat blurred and the light in the area where it is located does not allow us to see more, although we have clarified the image as much as possible. So we cannot distinguish more details or differences.

At a glance we can distinguish all the design features of the pick-up variant, such as the metal front fenders, the bumper with auxiliary lights at the ends or the large square-shaped side mirrors. As we already told you at the time, the new SUV will share the mechanical range with the pick-up variant. This will mean two twin-engine versions (634 hp) and others two versions of 3 engines (811 and 1,014 hp). GM Ultium batteries will have autonomy ranges of up to 563 kilometers.