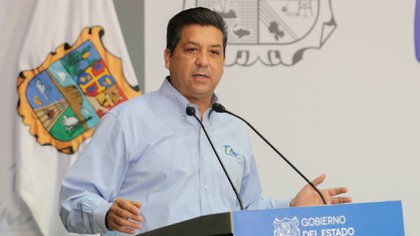 Cabeza de Vaca was elected governor of Tamaulipas for the period 2016-2022; He has been a federal and local deputy and mayor of Reynosa (Photo: Twitter / @ fgcabezadevaca)

The Attorney General’s Office (FGR) requested this Tuesday to the Chamber of Deputies the outrage of the governor of Tamaulipas, Francisco Javier García Cabeza de Vaca.

The PAN president is accused for his alleged participation in organized crime, operation of resources of illicit origin and equal tax fraud, according to the request sent to the lower house. This document was shared on social networks by the federal deputy of Morena, Ignacio Mier.

This request is expected to be ratified next Thursday, February 25, 2021.

Cabeza de Vaca was elected governor of Tamaulipas for the period 2016-2022; he has been a federal and local deputy and mayor of Reynosa. 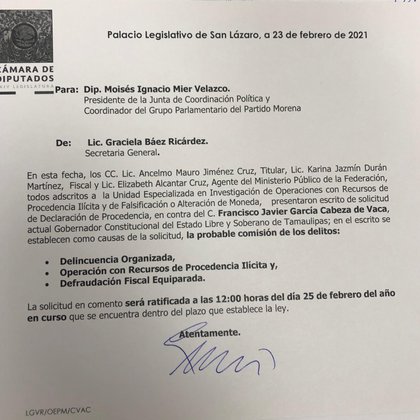 The violation is an exclusive legislative act of the Chamber of Deputies that aims to remove procedural immunity (jurisdiction) of public servers that indicates Article 111 of the Constitution to put them disposition of a judicial authority so that it judges them for possible crimes committed during the performance of your assignment, at the request of citizens, individuals with rights or the Public Ministry.

The Chamber, as the accusing body, issues the declaration of provenance but does not judge, only eliminates the constitutional jurisdiction so that later the public servant can be judged, in case it is considered that there are elements to suppose his probable responsibility. For this the Instructor Section you will have to do a ascertainment with all the conducting proceedings.

It should be remembered that in December 2020, the Financial Intelligence Unit (FIU) announced that prepared a criminal complaint before the FGR against García Cabeza de Vaca, relatives and some collaborators, for the aforementioned crimes.

According to the weekly Proceso, the UIF, in charge of Santiago Nieto, conducted research and found that your income does not correspond to the assets and properties you own, which amount to 140 million pesos, approximately. Are 82 million 794 thousand pesos, which according to the FIU, there is a difference between what García Cabeza de Vaca has obtained throughout his political career, with what he has accumulated in ranches and properties.

The complaint would include its partners and companies related to the governor of Tamaulipas, in Mexico and U.S.

A few months earlier, during a president’s conference Andrés Manuel López Obrador, which took place in Reynosa, the governor of Tamaulipas defended himself of what he called Political “attacks from their adversaries” in those who have pointed out corruption, as well as receiving alleged bribes delivered by the former director of Pemex, Emilio Lozoya Austin, to approve the Energy Reform in the six-year term of Enrique Peña Nieto. 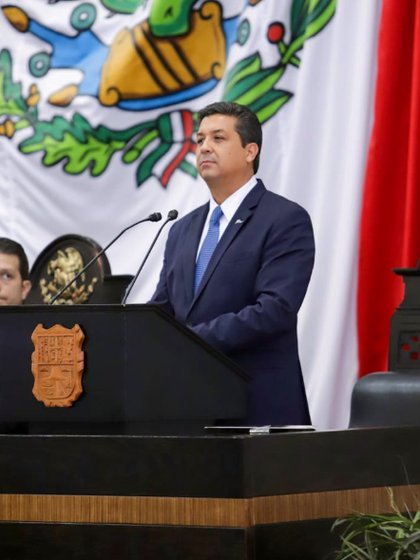 The state of Tamaulipas is experiencing a wave of violence and insecurity, marked by the burning of people, including immigrants (Photo: Twitter / @ AispuroDurango)

And it is that a video recorded in 2018 where Raúl Eduardo Monge Castillo, current head of the Fiscal Office of the Tamaulipas Ministry of Finance, points out that the president He received money from criminal groups to boost his political career.

Even Monge Castillo assured that since 2005, the current governor was financially supported for his proselytizing activities by leaders of the Los Zetas cartel, among them Jaime González Duran, the ‘Hummer’, arrested in 2008 and who faces an extradition process to U.S.

In addition, he maintained that for his campaign and that of his brother, the senator today Ismael Cabeza de Vaca, requested support from leaders of other cartels, including Julian Manuel Loisa Salinas, aka the ‘Comandante Toro’, and Jose Rodriguez Sanchez, the ‘Lagafe’, both former leaders of the Gulf Cartel.

It is important to note that, on the date this recording was made, Monge Castillo, who was then head of the Municipal Potable Water Commission of Tampico, was kidnapped for 40 days for alleged members of organized crime. In the recording he stated that during his abduction was forced, under torture, to make these statements, with the intention of affecting the image of the governor.

The arrest of Emma Coronel shakes the Sinaloa Cartel: the annoyance of the Mayo and the fear for what it will reveal “It is out of control”: the increasing traffic of fentanyl from China to Mexico and the official silence “I will not pay because I should not ”: Salinas Pliego’s strong response on the tax issue