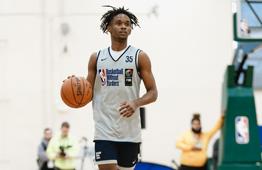 The Dominican team that will be in the Cap Cana “bubble” will be between 70 and 75 percent identical to the one that participated in the first window of the Basketball Americup last February.

This was made known by the main coach, Melvin López, who cited the shipowners Andrés Feliz and Jean Montero among the novelties among the 14 summoned who will be concentrated from the 23rd at the Hard Rock Hotel in Punta Cana.

“As of today, we will try to keep the nucleus at 70 or 75 percent of the group that traveled to Canada and received Canadians here,” says López.

He explained that this time it is a different situation due to the restrictions imposed by the Covid-19 pandemic, which is why it is planned to concentrate a maximum of 14 players.

“Andrés Feliz and Jean Montero have been invited as the novelty, but this does not mean that they are already in the team if not as part of the 14 summoned,” explained the coach.

Regarding the nationalized, López said that they are trying to have the best possible team being candidates for the position Sadiel Rojas and MJ Rhett since they have not been able to have contact with James Feldeine.

In February, when the team’s mark was 1-1, the team was made up of Gelvis Solano, Rigoberto Mendoza, Eloy Vargas, Ángel Delgado, Luis Montero, Ronald Roberts, Víctor Liz, Adris De León, Juan Miguel Suero, Rhett, Miguel Dicent and Adonys Henríquez. “Rigoberto -who had tested positive for Covid-19 in Mexico- is being followed by the doctors of the national team, he has already tested negative in one of the tests so we hope that he is ready to start training without problems”, added.

He said that there are only one or two cases of players who are not in action at the moment, but that they are all professionals and keep training.

The Dominican Republic will face the US Virgin Islands first on Sunday, November 29 (5:00 pm) and the following day against Cuba (8:00 pm), in Group C matches of the qualifier, which also includes Canada.

Guzman is not 100 percent confirmed by his commitments as director of operations for the Stetson University team in the NCAA.