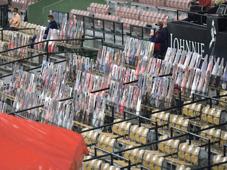 Without the hustle and bustle or the joy that the fans add to the games, the baseball season began last night to live the harsh reality that the era of the coronavirus has imposed on it.

The Tigres del Licey and the Leones del Escogido faced each other behind closed doors in a Quisqueya Juan Marichal Stadium with empty stands, without the flavor that the so-called player number ten gives them.

The inanimate cardboard faces that occupy some seats in the low boxes try to cover some gaps and make the television transmission less cold, but they do not help to raise the adrenaline of the players.

They have always applauded the good performances of their teammates, but now their cheers can be clearly heard by photojournalists and other members who work from the preferred area and in the broadcast booths, as well as the security personnel of the teams and the Dominican Baseball League.

Clearly, the “Striiiiikee!” decreed by Hardlen Acosta, the main referee of the match, and also those sung by some members of the Baseball League to the three honor pitches made by President Luis Abinader even though not all of them fell in the zone.

“Playing without fans is like dancing without music,” wrote the Paraguayan poet Eduardo Galeano (f), who was a soccer lover.

“Of course it is not the same,” said the journalist specialized in baseball Dionisio Soldevila, deputy editor of the newspaper Hoy

“The truth is that a stadium without an audience is discouraging. The Dominican Republic’s winter baseball, beyond the talent that one normally sees on the ground, has as an ingredient the fervor of the public ”, he highlighted.

“The fans say it, the players say it, the imported ones, one of the most interesting things about playing winter ball is the fervor, how hot Dominican ball is. The way the public is handled ”, Soldevila stressed.

“However,” he added, “we won’t have this at least starting the season, but it’s something to get used to. Unfortunately, the pandemic changed everything, it changed everything. The season started on November 15 and not on October 13, as it usually did. It is part of the adjustments that one must make ”.

“It is the time we are living. It is our reality and baseball cannot escape that reality, “argued Juan Mercado, deputy editor of the daily El Día.

“The most important thing is to value the great effort that the league has made, that the Government and all those who are involved in the tournament have made to make it happen,” he said, hoping that the fan will support him from home following the broadcasts.

The good part
Mercado highlighted that the pandemic will allow a group of players, established in the Major Leagues, such as outfielders Víctor Robles and Gregory Polanco, from Águilas Cibaeñas and Leones del Escogido, to participate in the campaign, respectively; third baseman Luis Andújar and pitcher Domingo Germán, teammates with the New York Yankees and now with the Toros del Este; the receiver Francisco Mejía, from the Stars, and the promising pitcher Deivi García, also from the Bronx Mules, who in the coming weeks will wear the Tigres del Licey uniform, among many others.

Likewise, valued prospects will play such as infielder Wander Franco and ranger Julio Rodríguez, from the Escogido; pitchers Albert Abreu and Luis Gil, as well as shortstop Anderson Tejeda, from Licey, who played little in the summer because Covid-19 aborted the minority circuits of organized baseball.

“The tournament will serve as an escape route for what the country and the rest of the world are experiencing,” Mercado said.

“People have to, somehow, distract themselves from this pandemic and what better way to be the main national pastime,” said the narrator and coordinator of the Blue Chain, Ildefonso Ureña.

Marino Pepén, a chronicler who for years has produced with his brother Junior the radio program “Conversando de Deportes”, in the city of Boston, said that lifeless stadiums are a sad reality that was lived this year in the majors and now here.

“What can I tell you … an empty stadium, without an audience, we already live in the Major Leagues. It is necessary to see if the players will have the necessary motivation because the public motivates enough stamina, the adrenaline of the players ”, he pointed out.

“All that remains to be seen, but the most important thing is that the tournament will be held despite the pandemic,” he said.

“I wish you the greatest success because today we have on paper perhaps the best six teams of the last 20 years of the Dominican League. May it be due to a situation of Covid-19, perfect, but that is what we have to live, the present, what is happening, ”emphasized Pepén.

Atmosphere in the play

At last!
Probably for the first time in history, there will be no black market on the periphery of stadiums, at least as long as it is played behind closed doors. It is an evil that not even the National Police have been able to eradicate.

Little life
Vendors of deer, rum, soft drinks, pizzas, cakes and others are also conspicuous by their absence.

Inertia
The movement of fans in the park lobby buying their team shirts in the team stores, groceries or, simply, passing by is another of the notable realities that take away the spice of the event.