In response to the bill that forces social networks to share their income with the media, Facebook made a radical decision in Australia that affects millions of users and media in general.

This morning, something changed for the 15 million Australians who have a profile and use Facebook regularly: while scrolling through the feed, they found posts from friends, commercials and memes, but were unable to find information about what is happening in the day.

This is not an error, but the entry into force of a Facebook block, product of the struggle between social networks and the Australian government for a bill which aims to force Facebook and Google to financially compensate the media for the journalistic and informative content that is shared on their networks.

After months of threats prior to the discussion of the Bill just passed by the lower house of the Australian Parliament, the two technological giants (investigated in different latitudes for monopolistic practices) took opposite paths: while Google announced its first multi-year contract In the story with the News Corp media group, Facebook launched the lockdown starting Thursday.

In a statement published on February 17, Facebook explained that in response to the Australian measure, which “fundamentally misunderstands the relationship between our platform and the publishers who use it to share news content,” the social network decided block news content in Australia.

What will change in Australia with the blocking of Facebook?

Facebook’s restriction of news and publishers means a informational fence for millions of users of the social network in Australia, what they will not be able to see or share any kind of local or international news content. For users of the rest of the world, the block means the inability to view and share news content from Australia or from news pages. 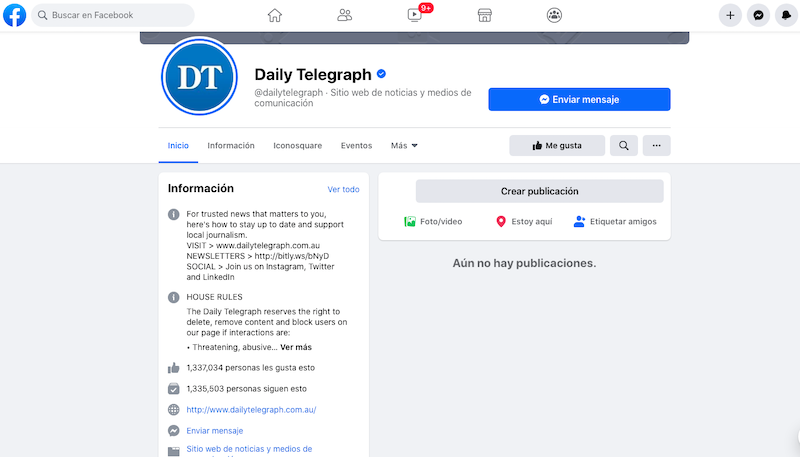 This is what the Facebook page of the Daily Telegraph looks like, the newspaper with the largest circulation in Australia with 1.3 million followers on the social network. Photo: Facebook

Regarding the Australian media, the new Facebook policy prevents them from posting or sharing any kind of publication on their pages.

“Unfortunately, this means that people and news organizations in Australia are now banned from posting news links and sharing or viewing Australian and international news content on Facebook. Globally, posting and sharing news links from Australian publishers is also restricted, ”Facebook explained in a statement.

The Australian government responded to the Facebook blockade as “misguided and authoritarian.” Josh Frydenberg, Minister of Finance, considered that the measures of the social network are unpopular and will tarnish your reputation on the subcontinent.

While Elaine Pearson, director of Human Rights Watch in Australia, compared Facebook’s action with that of “an oppressive government”, Once millions of Australians realized that not only media profiles had disappeared, but also posts on official pages of fire, police, hospitals and state health departments.

Despite the fact that Australia is not exactly one of the most attractive markets for Facebook (the social network accepted in its statement that the news is only 4% of the content that people see in their feed), the intention behind the iron stance intends to avoid set a precedent that can be replicated in various geographies, especially in the European Union and the United States, where the social network faces investigations for monopolistic practices.