It was the weekend of premiere of Extreme E and the Desert X Prix has shown us that there is still room for improvement for a competition that has practically completed its test day over the Saudi desert. With the races already conditioned from Saturday by the large amount of dust present, the organizers had to carry out an emergency solution to be able to develop the qualifiers on Saturday, with individual attempts that would determine who would go to Semifinal 1, who to the Crazy Race and which teams were eliminated and would only compete in the Shootout to fight for seventh.

With all this, very soon it began to be seen who would be the great favorites to victory. The RXR of Nico Rosberg, Johan Kristoffersson and Molly Taylor They were going to take the best time in Q1, while in the second he also brushed it with his hands until a penalty for exceeding the speed at the entrance to the driver change would end up delaying them and giving the first place to Lewis Hamilton’s X44, Sébastien Loeb and Cristina Gutiérrez.

Behind them, the ACCIONA Sainz Team with Carlos and Laia Sanz made a gap between the three of the Semifinal 1, with the Catalan gaining confidence on the sand, while the Madrilenian was very close to the top times that the Swedish pilots, Kristoffersson and Timmy Hansen, as well as Loeb himself, were doing. Precisely the 2019 RallyCross World Champion, the eldest of the Hansen brothers, along with Catie Munnings, they could have made things difficult to any of the aforementioned formations, however, a slow puncture in Q1 forced the British to reach the finish line on three wheels, with a driving demonstration that spoke highly of her quick adaptation to the ODYSSEY 21.

Unfortunately, the Veloce team, who could not even complete a lap all weekend after the accident of Stéphane Sarrazin (Jamie Chadwick could not compete), as well as the ABT Cupra, with Claudia Hürtgen’s spectacular turnaround which also forced them to work in the pits to get everything ready and try to start in a Q2 that they finally did not reach. In the case of the Chip Ganassi structure, a failure in the power steering also sent them to the Shootout, facilitating the passage of the team of Jenson Button and Hispano Suida to the Crazy Race with Andretti.

Already on Sunday, the organizers decided to take the cars three by three to the races, but already in the first semifinal we could see the harsh reality, with a battle that seemed epic between Loeb, Kristoffersson and Sainz deciding to go through the first door of the route due to the density of the powder in suspension. The three-time World RX champion won the duel by three, while Sainz and Loeb had a little contact and Carlos, admitting that he had used the extra power too soon, was relegated to third place that left him without exceeding the cut. Without errors in the ‘Switch’ and without problems on the part of Molly, Cristina and Laia to complete their laps, the result was that of a race that evolved from more to less, with a second turn of managing the time differences and the batteries. 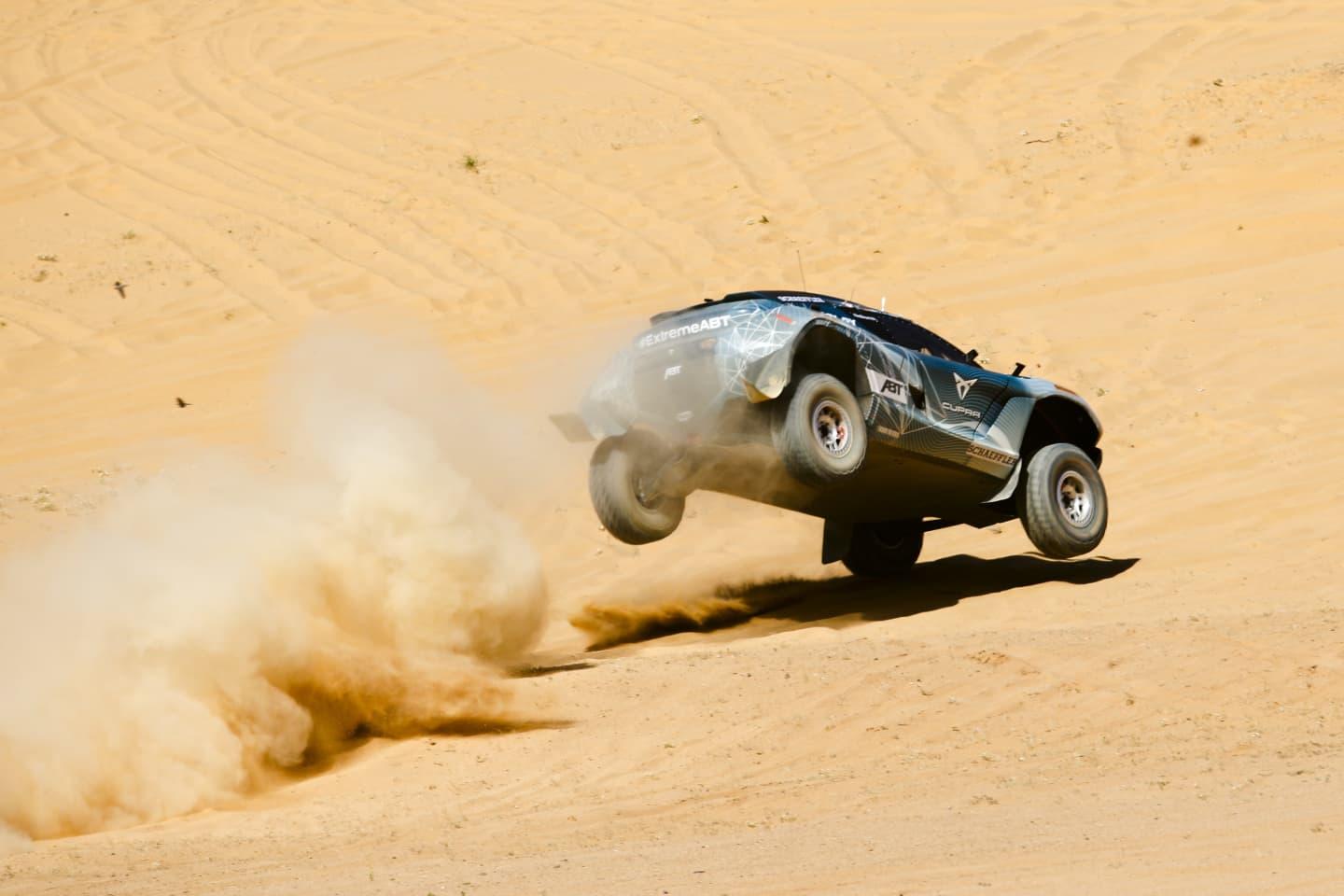 The Crazy Race for its part was going to have the Andretti team as a great highlight, after a fleeting exit from Timmy Hansen that placed him at the head of the group formed by the British, Oliver Bennett and Jenson Button. The script seemed written in the same way as the previous semi-finalSo it was not surprising that the standings ended up in that order again despite Christine’s effort in the second lap to try to regain some time from a very confident Munnings.

The Shootout for its part would be played with only two cars, with the novelty that it would be Sara Price who would compete with Mattias Ekström. The American put up with the guy, the two-time DTM winner and one WRX winner, so left Kyle LeDuc in a very good position to hunt down Claudia Hürtgen… Something that he achieved, but with a very hard accident between the two cars by range that led to the abandonment of both. Again, the little experience of some competitors, added to the excess of fieryness of others, was an explosive mix. 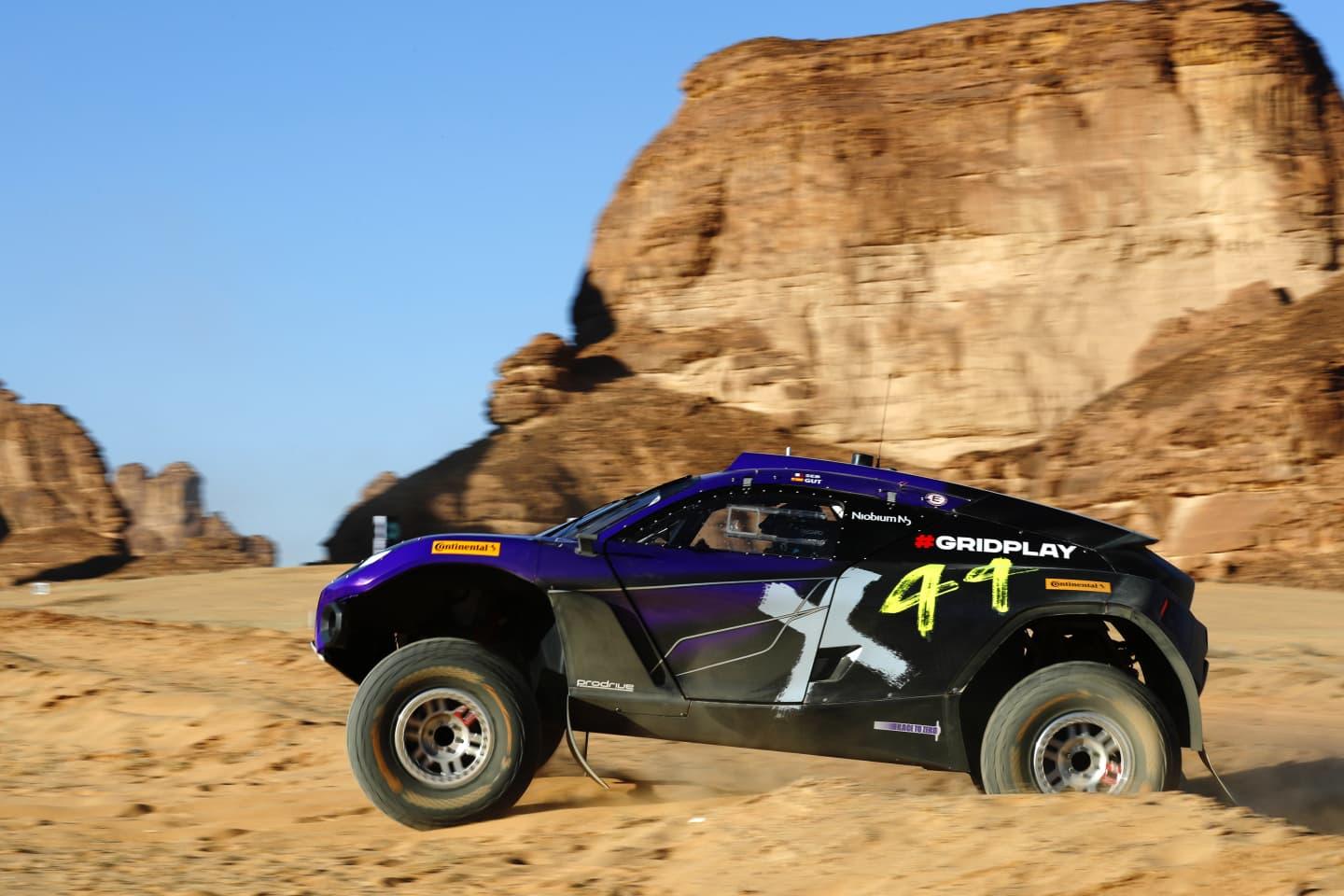 The grand finale was again much calmer. Again the start left us spectacular moments, with the battle between Hansen and Kristoffersson in which Johan won again in an overtaking between potholes that anticipates that there will be a show in future races. In Loeb’s case, there was little he could do, falling behind in third place and subsequently suffering power steering problems, a big Achilles heel for the ODYSSEY 21 all weekend (Sainz also experienced them on Friday at Shakedown) .

Molly Taylor would pick up the baton and do a job without errors, with Munnings in second position progressively approaching, although at no time being able to consider overtaking. The Australian and Kristoffersson scored the first victory in the history of Extreme E, while Hansen and Munnings arrived second and Loeb and Cristina Gutiérrez third, with the Burgos having to use the handbrake to help turn the car. Sainz and Laia finished fourth, while Christine GZ and Oliver were fifth. 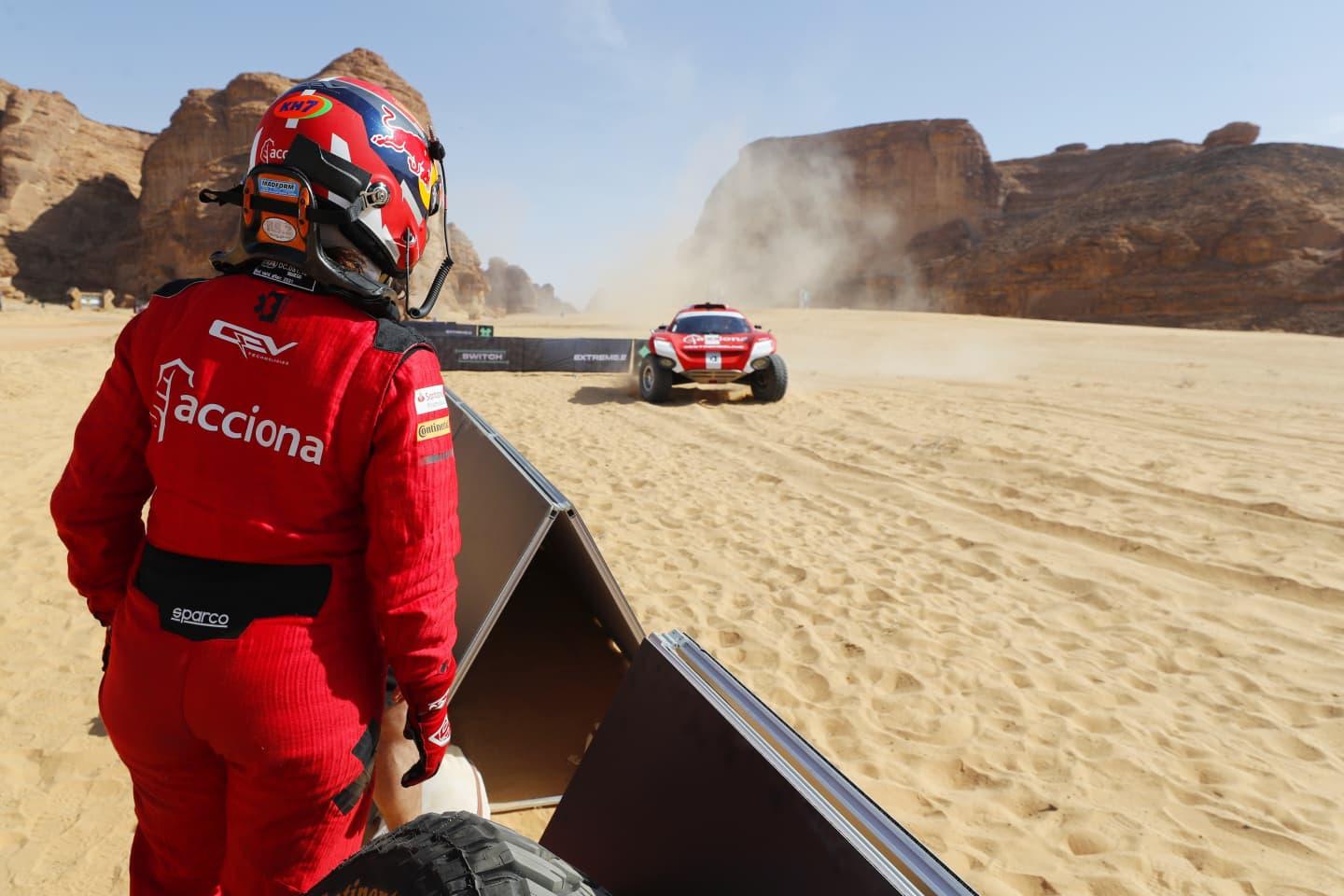 Many things to improve on the Extreme E:

It is clear that we are facing a newborn championship, tackling their ‘zero’ career, so to speak, so they should be allowed room for improvement in the next events. Nobody has overlooked that the dust in suspension has been the great protagonist during Sunday, something that has affected the sporting part, but also the safety of the participants, especially those with less experience when riding in these low visibility conditions and on the off-piste.

It is a common problem, for example in rallycross and other competitions such as autocross or katcross, solves through products that are thrown into the earth and they serve to prevent dust from rising, obviously a solution that in the Extreme E has no place and that would not be in accordance with the purpose of the series. Therefore, the organizers of the championship will have an intense work ahead, knowing that the next event will take place in the surroundings of the Pink Lake of Senegal and that, although this effect is expected to be less, it cannot be ruled out either.

Maybe It was not the most successful that he shot solo on Saturday and that on Sunday the face-to-face competitions began with participants who had not rolled a kilometer in their sports careers in the dust, something that was demonstrated when in the consolation shootout, Kyle LeDuc ran behind the ABT Cupra of Claudia Hürtgen when she was left without visibility in an area where the speed differential between the American and the German was too wide. With almost two months to go to the Ocen X Prix, they obviously have a lot of work to do in the racing format.

Also in sports it is decisive. If the driver who gets to the first corner first takes a competitive advantage due to dust that ranges between 20 and 30 seconds, this helps the second participant in the team to be able to face a second round of management, even controlling the amount of energy used for the next race. It was not possible to see the second drivers shine on Sunday, a role that in the relay has been habitually adopted by the women, so we have not been able to see any overtaking, or face-to-face duel between them, something that many of us surely wished for .

At the moment perhaps the most important thing they have: a spectacular car, big names among drivers and teams and the curiosity generated in the general motoring fan. It is clear that for the second round of the season they need to present improvements, the challenge is there, although they were already aware that it was not going to be easy, nor was it with Formula E.