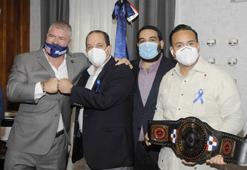 The veteran American Lex Macmahon, debutant in MMA, will star in the main fight against his compatriot, also experienced, Justin Thornton, during “Fighting Force 4”, as part of a spectacular weekend of mixed martial arts, which will feature with two attractive billboards, this Saturday 21 and Sunday 22 November, in the Fencing Pavilion of the Juan Pablo Duarte Olympic Center.

The announcement was made by businessman Rodolfo Dahuajre, president of Fighting Force, during a visit he made this Thursday to the office of the Minister of Sports, Francisco Camacho, in which he was accompanied by Macmahon and other fighters, who will also be part of the card. , which will feature eight engaging fights.

Vice Ministers Franklin De la Mota (Administrative) and Elvis Duarte (Technical), along with Fernando Dahuajre, National Commissioner of Mixed Martial Arts, represented Minister Camacho, who was absent due to personal occupations. De la Mota, highlighted the importance of the competition and said that this is part of the public-private alliance that President Luis Abinader encourages, and that the Sports Minister, Francisco Camacho, promotes in the sports part.