The goal. The supreme art of football has become an obsession for the National Team. As soon as he refuses, one in the first two games against Sweden and Poland, as he comes in spurts, five to Slovakia. Nothing better to deal with such a transcendent matter than to go to those who know about it. They were specialists in the matter, both in their clubs and in the national team. The couch of Carlos Alonso González, ‘Santillana’ and Julio Salinas does not close for holidays.

“Ferrán, Olmo, Oyarzabal … they are not forwards, in this Selection the only ‘9’ is Morata”

Julio Salinas is a born conversationalist and enjoys talking about it. “What is a striker? What is a scorer? Sometimes players are called forwards who are extreme, midfielders … As is the case now with Ferrán Torres, Dani Olmo, Oyarzabal … Center forwards in this Selection you only have Morata and Gerard Moreno and this one is more atypical. Maybe he plays better with a man of position. I call Kane, Lewandowski, Luis Suárez forwards … “.

Julio always felt like a pure striker as well as a scorer. “The scorer lives with the goal in his head. On Wednesday Spain scored five, but I’m sure Morata left screwed up and didn’t sleep at night. And Gerard Moreno, possibly, neither. Even if you win 5-0, your happiness is incomplete. You are partially happy. If I didn’t score, I wasn’t happy. Me and everyone. There is no striker who if he does not score will be happy. It may be that what he says is a stupid thing, but you lose 5-4 and you have scored three or four goals, you are even happy. The scorer is the most selfish of footballers. We live on goals. The forward is always going to be judged for it. Not even because of the chances, or the times he touches the ball or goes off the mark “

Julio Salinas celebrates a goal with the National Team.

The issue of penalties reminds him of past times lived in the first person. “All the forwards want to take penalties. Morata is not a specialist like Aspas, Mendieta, Koeman, Oyarzabal … But I understand that he wants to throw them away. What you want is to mark. In the end you can play very well, Morata did it, but he lives off the goal. He shoots penalties on his teams when they let him because the normal thing is that of 10 you shoot, you score seven or eight and score goals for your particular account. I also wanted to shoot them, but they only let me shoot at Alavés and I got the four that I launched“.

Julio remembers that he could not allow himself the luxury of being several games without scoring. “I was three games without scoring and it was a drama. I wanted to cut my veins and send my boots to drink … I threw them in the trash. I never had a three-month streak without scoring. That seems incredible to me. I had one Last time at Barça in which he did not play and, of course, he did not score, but he went to the National Team. If I had been three months without marking, they would have removed me from the team and they would have fired me from the club. And I see that there are forwards, like Williams, who have not scored a goal for a year and continue to play. That is to give the player confidence. Nobody gave me that confidence. Well, yes, one of my life gave it to me: Javier Clemente “.

When it refers to Javier Clemente, Julio changes the tone of voice. He adores him. “But his confidence had one condition, that he scored. Show me with goals every Sunday why I have to put you up. I’m going to stick with all the press that tells me that I have taken Butragueño to put you, he told me. He had to show him every Sunday that he was the best Spanish scorer. That’s why I had to leave Deportivo for Sporting. And I was and that’s why I went to the Eurocup. And if he went, then he had to score in the National Team as well. “

His latest reflection points to the mutation that the forward position has had in recent years. “The reality is that every day there are fewer center forwards to use. They take another type of forwards … In my time there were already them, but now football has changed so much that you can play, as the Spanish team did, with players with a lot of arrival and without a pure center forward. For my Villa, he has been the best striker we have had in Spain. He was a scorer and also adapted and could play on the wing. If you don’t have a good-good Lewandowski type, I understand that you can play with those half points such as Raúl, Alfonso, Cesc, Silva … they were very good. They fixed your attack because they had a lot of arrival and goal. In those cases, the figure of ‘9’, if it is not an indisputable one, it will still hinder you. You are not going to remove those pieces of players for putting a nine that does not solve anything … “. 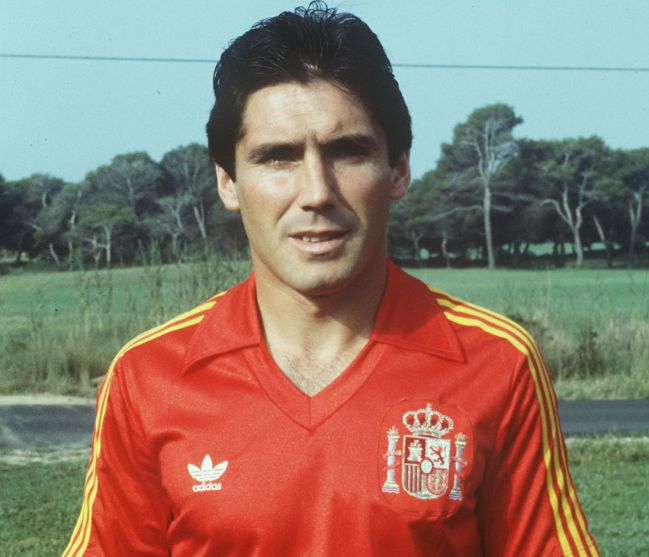 Santillana, with the National Team.

Santillana takes the floor. “The scorer lives only for the goal. Streaks go by. It has happened to me. Suddenly he scored in five games in a row and suddenly he didn’t score one. It is not known how to go from one situation to another. There were moments when I had the feeling that, even if the goalkeeper took me away, he was not going to put it between the three sticks. It is something psychological. Mental. It does not have a football explanation. Sometimes the coach on duty would tell me to rest a game, to clean my head for a week, to train hard and the next game that I got I used to score. The worst of all for the scorer is not having chances. The normal thing is that, if you have three, mark one “.

The focus at the moment is on Morata. “With the chances he has, the reality is that he has them, as soon as one day he has a couple of them, it will all be over. It’s that simple. No need to review it again. His work on the team is terrific. It should not be obsessed. The important thing is to be physically fit, to be fast, agile and Morata is. He has also had the bad luck of the missed penalty. Everything is coming to him … “

“If I had been three months without marking, they would have removed me and kicked me out of the club”

Remember that he had streaks of five and six games without scoring. “For a Real Madrid center forward that was a lot with the competition that there was and the team’s need for your goals. What not to lose is confidence. If you do that is when you can have problems. There is no medicine to cure these streaks. The biggest problem you can have is that if you don’t mark the coach will remove you. But for sure it will put you back and as soon as you get one you go back to your roots “.