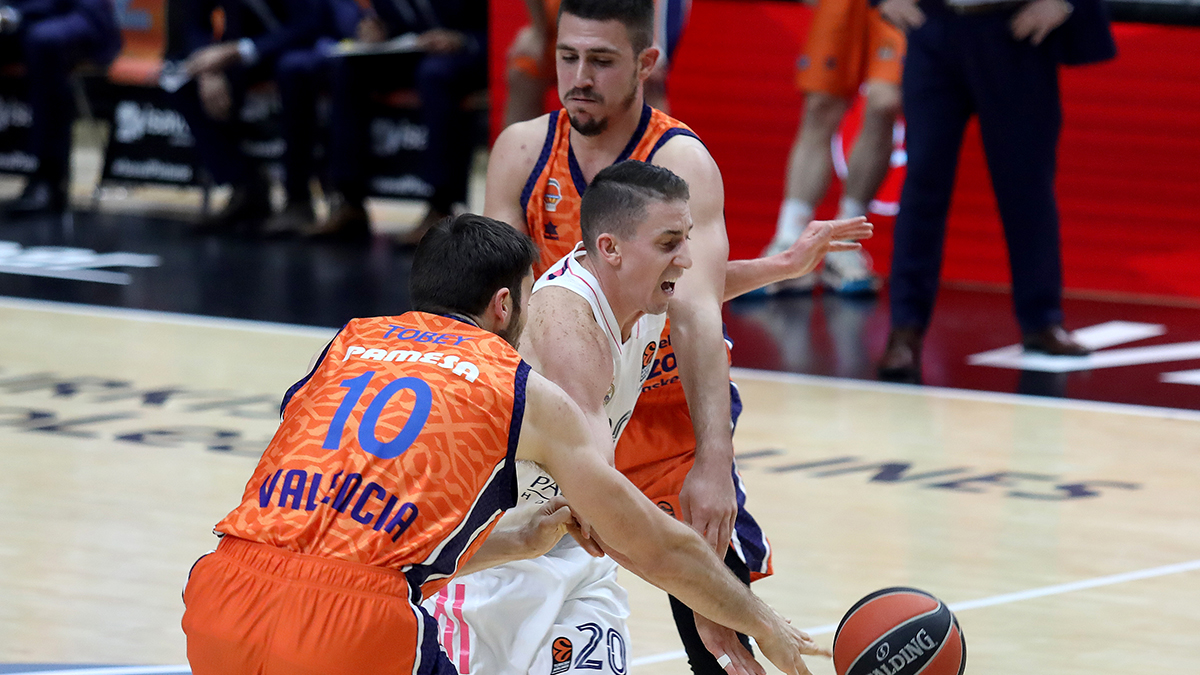 Valencia deepened the impasse in which Madrid was blocked during the Cup final against Barça. With Van Rossom, Marinkovic and Kalinic at the helm, Ponsarnau’s team successfully beat a disfigured rival (89-78), without tension or alternatives to escape from the couch. With more physical and mental energy, the Taronja team portrayed a Madrid unbalanced by casualties, troubled by doubts and deconcentrated from end to end of the game.

The Euroleague faces the home straight of the regular phase with more away victories than ever (46%), better shooting percentages (given the decrease in environmental pressure), more overtime and even matches than ever before and the classification in a fist . Only two wins separate Madrid, fourth in the table, from Valencia itself, tenth and a handful of the playoff spots.

Each team had a recent library precedent to go to. Those of Ponsarnau remembered that shaking of the second continental day, in which Dubljevic, Kalinic, Saneme and company unraveled and dominated Madrid by up to 25 points. Laso’s men handled the reference of the Cup quarters, where the whites, led by Deck and Thompkins, also melted a hypotensive rival with a show of character. And, between virtues to be exploited and purposes of amendment, both contenders threw themselves into the ring. The first attack was Valencian and Madrid did not recover from the goring.

The staging was a major pulse between Marinkovic (12 points in 9 minutes) and Carroll (15 in the opening quarter). But the difference was that the Serbian received the backing of Van Rossom, Williams and Kalinic successively and the Madrid escort barely found any administration in Tavares. Turnovers and fouls (three by Garuba in that stretch) put Madrid on the wrong foot and with no response to the first change (29-19, m. 9).

Laso’s men opened the drawer of doubts earlier than that of solutions. The shock after the clash against Barça in the Cup lasted at La Fonteta and Hermannsson was encouraged to dig into the wound (44-30, m. 15). Valencia smoothly controlled the rhythm of operations, clinging to their remarkable shooting percentages, while Madrid’s disadvantage and setbacks accumulated, with another injury to Llull – who went to the bench with his face changed and calibrating the bad sensations in the right knee. He did not return to the track in the second half. A triple by Prepelic crowned the Valencian optimism and the mess for the whites (55-35, m. 20).

Madrid faced the restart as a matter of pride and local concessions allowed a 3-12 run in just four minutes. But Van Rossom got serious and Laso’s men found neither the lost oremus nor the concentration necessary to continue any attempt to come back. From 60-45 to 71-51 in a journey of impotence for whites. Abalde’s last triples hardly served to mask the torment suffered by the Madridistas. Five Valencia players signed double digits in scoring to strengthen Taronja’s bid to the top-8 of the Euroleague.