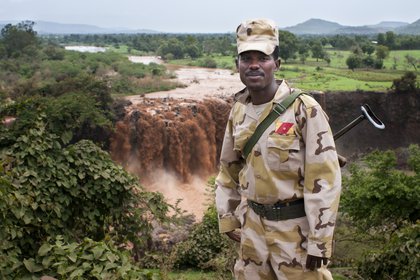 03/25/2020 A soldier in Ethiopia. The Prime Minister of Ethiopia, Abiy Ahmed, announced this Sunday the imminent start of the third phase of the offensive against the Tigray People’s Liberation Front (TPLF) and gave the group’s militias 72 hours rebel before the start of the assault on the capital of the region and the last important stronghold of the group, Mekelle. The Army is already about 90 kilometers from the capital of the rebel region. POLITICS AFRICA ETHIOPIA SERGI REBOREDO / ZUMA PRESS / CONTACTOPHOTO

The Prime Minister of Ethiopia, Abiy Ahmed, announced this Sunday the imminent start of the third phase of the offensive against the Tigray People’s Liberation Front (TPLF) and has given the rebel group’s militias 72 hours before the start of the assault on the capital of the region and the last important bastion of the group, Mekelle. The Army is already about 90 kilometers from the capital of the rebel region.

“We ask you to avoid more massacres and destruction of cities and save yourselves from eternal damnation in the history books,” Abiy said in a statement posted on social networks.

Abiy has explained the three phases of the military operation in this way: in a first phase, “our defense forces are remobilized and strengthened so that they can fulfill their functions.” In the second, the objective “surrounds the city of Mekelle” and reduces the capacity of the rebel militias. In this phase the cities of Dansha, Humera, Shire, Shiraro, Axum, Adwa, Adigrat, Alamata, Chercher, Mohoni or Korem have been “liberated”.

In the third and final, the goal is to seize the capital of the Tigray region, Mekelle, “the final step in bringing the treacherous TPLF to justice.”

Military action “must be done in such a way that the result is minimal damage and casualties.” “Lives should not be lost and no property should be destroyed because of a few greedy individuals who want to have impunity by using their own people as human shields,” he reproached.

“Like terrorist groups in some countries, who do not care about the people of their country, they have taken the city of Mekelle hostage and treated it as a war zone and not as the home that it is for many innocent Ethiopians.” Abiy has warned.

The military escalation has been the culmination of a pulse that began with the coming to power of Abiy, as the first Oromo head of Government. The TPLF was the strong party within the ethnic-based coalition that ruled Ethiopia since 1991, the Ethiopian People’s Revolutionary Democratic Front (EPRDF).

Away from power, the TPLF has seen in the reforms undertaken by Abiy, in particular those related to human rights abuses and reconciliation with armed groups among others, as a ‘witch hunt’ against its leaders, which were seen in many cases separated from the positions they held.

More than 33,000 Ethiopians have crossed the border into Sudan in just over a week to escape the conflict. Those who flee, including many children, do so with little to nothing to find themselves in unsuitable conditions and without the help they need.

The UN and NGOs warn that given the continuous flow of arrivals, about 4,000 a day, the Sudanese authorities are being overwhelmed and despite the efforts of humanitarian organizations, the needs are far beyond the capacity to meet them.