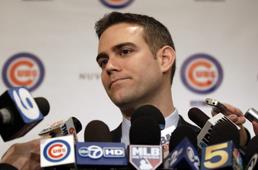 Theo Epstein, who transformed the mediocre Chicago Cubs to reach a championship in 2016 that ended a perennial drought, resigned after new seasons as the club’s president of baseball operations.

The Cubs announced Tuesday that Epstein is leaving the organization, with general manager Jed Hoyer being promoted to take his place.

Epstein had said at the end of last season that his intention was to continue for at least one more year, with a contract that was to expire in 2021. He repeatedly raised the view that an executive should not exceed 10 years in the Same place, and the following year marked a decade since he split from the Boston Red Sox to go to Chicago.

In a statement, Epstein said he will “treasure” his cycle with the Cubs and that it was simply time for a change.

“The organization faces a series of decisions this winter with long-term consequences; those decisions must be made by someone who will be here for a long time, rather than another year, “he said. “Jed has earned this opportunity and is absolutely the right person to take on baseball operations at such an important time.”

Executive Director Tom Ricketts said the Cubs are “grateful for all that he has brought to this organization and to the city.”