The new Mercedes-Benz EQA is the new electric from the star brand. It is based on the EQA Concept that was presented during the 2017 Frankfurt Motor Show, and its final image can be sensed thanks to the first official images published by the manufacturer, still with camouflage.

The electrical surge of Mercedes Benz the arrival of what will be the access model equipped with this technology is expected. Its about Mercedes-Benz EQA, based on the Mercedes-Benz GLA and with rivals such as the Audi Q4 e-tron or the Volkswagen ID.4.

The star firm wanted to show the progress of the project with the publication of a video in which the electric SUV is seen in the hands of another of its upcoming battery-powered launches, the EQS.

The new German electric derives from the Mercedes-Benz EQA Concept, a prototype that was presented during the Frankfurt Motor Show 2017. However that was a compact three-door 4.29 meters long, slightly smaller than the current Mercedes-Benz A-Class. There will be variations in this regard, both in the measure and the number of doors, which will be five.

The aesthetics of the model will thus follow the line of the aforementioned GLA, although some changes are expected. The grille will be blind in the style of the Mercedes-Benz EQC, while the bumpers are expected to have a specific design. 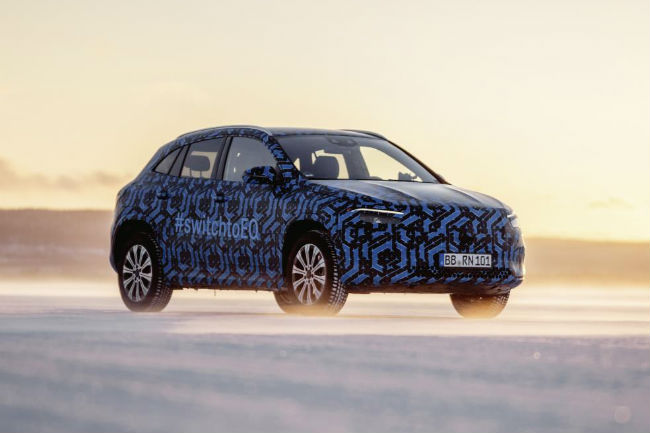 The new Mercedes-Benz EQA It will offer different levels of power, although the manufacturer has already confirmed that the most powerful will exceed 260 horses and 500 Newton meters of maximum torque. With this, the new Teutonic electric can accelerate from 0 to 100 kilometers / hour in about five seconds. The maximum autonomy will be around 400 kilometers.

It remains to be seen whether the Mercedes-Benz EQA Production will keep details of the prototype such as the Sport and Sport Plus driving modes, capable of altering the distribution of torque between the front and rear axles. In addition, the activation of these modes also modified the appearance of the grill in the ‘concept’.