What exactly is Ingenuity?

Ingenuity is a small helicopter, a drone, included among the devices that Mars 2020 mission NASA and the Perseverance rover have taken to Mars. This is a technological demonstration, like the MOXIE experiment, and not a scientific instrument like MEDA or PIXL, as it is not intended to help or conduct any scientific research on the red planet.

Other successful technology demonstrations that NASA has brought to the red planet are the Sojourner rover from the Pathfinder mission, and Mars Cube One (MarCO) alongside the InSight mission.

What will you do on Mars?

The main objective is to try a powered helicopter flight on that planet. It is a simple phrase but one that includes an infinity of obstacles so that it turns out well. The first of these, the Martian atmosphere, which is very thin and has about one percent the density of Earth’s.

Ingenuity is extremely light and requires its blades to be able to rotate much faster than necessary on Earth. The only advantage of flying on Mars is that the planet’s gravity is lower than that of the Earth.

Therefore, Ingenuity needs to be extremely light and get its blades to rotate at a much higher speed. The only advantage of flying on Mars is that the red planet’s gravity is only one-third that of Earth, so it takes less effort to lift the same amount of mass.

Another important objective of Ingenuity is to observe if its structure is capable of withstanding the extreme temperatures of the Martian night, which can drop to as low as -90 degrees Celsius.

When will it take off?

NASA expected Ingenuity to take off for the first time on Sunday, April 11. However, the agency has found problems in the drone’s software after a high-speed spin test of the helicopter’s blades. There is still no scheduled date for the flight, but NASA estimates to schedule a new attempt during the third week of April.

#MarsHelicopter update: Ingenuity is healthy, but it needs a flight software update. While the development of the software is straightforward, validating and uplinking it will take time. We will set a new flight date next week. https://t.co/b0MzMIPGKz pic.twitter.com/R2wYKaCxqY

The mission window is 30 soles (31 Earth days), during which time Ingenuity will attempt several test flights and perform different tasks, such as taking pictures and environmental data.

Where has Ingenuity been all this time on a mission?

Beneath the ‘belly’ of Perseverance’s body, embedded laterally and protected from material that was raised during the descent and landing of the rover. Before, both it and the helicopter traveled from Earth to Mars in a capsule along the 471 million kilometers that separate the two planets. What an interplanetary ‘ball’ carrying a kangaroo and her baby.

Illustration that compares the size of Perseverance (large) and Ingenuity. / NASA / JPL-Caltech

How is this little helicopter?

Ingenuity is like a hand luggage (13.6 x 19.5 x 16.3 centimeters) and weighs about 1.8 kilos, unlike Perseverance, which measures the same as a city vehicle and its mass exceeds a ton.

But the size of this helicopter has nothing to do with its capacity. As it will have to fly by itself and without communicating with the Earth in real time, it is prepared to make decisions automatically based on parameters programmed by NASA engineers: it will have to adjust its internal temperature, it will analyze the terrain during the flight to maintain its position and will take pictures of the surface at height.

What have you achieved so far?

The fact of building Ingenuity, defends NASA, is in itself an achievement. The space agency has dedicated six years to design this drone and demonstrate that it is possible to build an ultralight tool capable of generating enough energy to take off from the Martian soil and survive autonomously in the Martian environment. In this video (as of 2:46) you can see how this little drone flies.

Ingenuity has already shown in simulations on Earth that it is capable of flying in Martian conditions. Now it’s time to prove it on the real Mars

So far Ingenuity has passed the launch phase of the mission and has shown that it can recharge its batteries on the space journey. The small helicopter has managed to fly in cameras that simulate the scene of Mars on Earth. Now it’s time to get out of the simulator and demonstrate it in real life.

What steps do you have to go through before flying?

Before taking off autonomously, Ingenuity has to fulfill a list of previous objectives:

– Survive the interplanetary journey to Mars and the landing (done).

– Unfold safely from Perseverance’s ‘belly’ and land on the ground (done).

– Maintain your internal temperature during the Martian night (done).

– Recharge your batteries with your solar panels (done).

– Communicate with the rover through a Perseverance subsystem and confirm this communication with NASA (done).

– Spin its rotors for the first time, without taking off the ground. 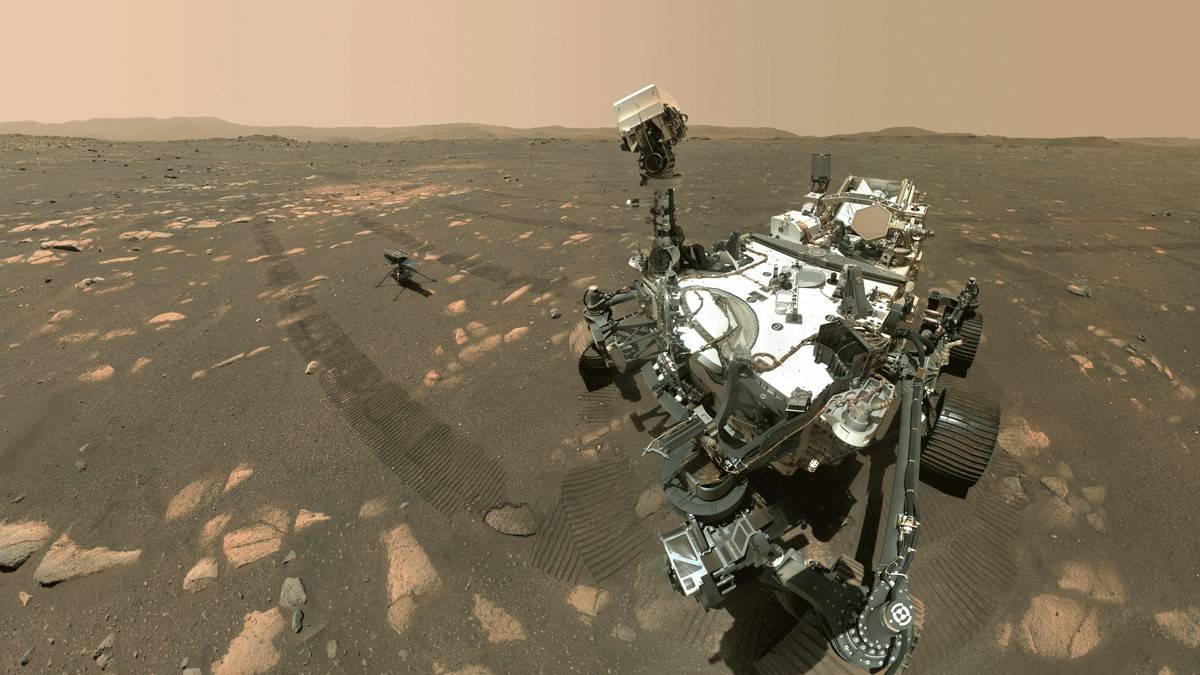 This is not an illustration: it is a ‘selfie’ that Perseverance has taken after leaving Ingenuity on Martian soil. / NASA / JPL-Caltech

What will happen next if it is successful?

If the first flight is successful, Ingenuity will try to fly another during the scheduled 31 days. In any case, the little helicopter will have achieved a feat of aviation: demonstrate that it is possible to design a powered flight apparatus adjusted to the characteristics of another planet.

This technological demonstration will open the way to send instruments with flight capacity in future missions to Mars, with and without humans. In addition, it will offer a unique point of view, which is not within reach of the satellites that orbit this planet or the rovers or stations deployed on its surface.

Finally, NASA argues that a drone on Mars could potentially carry light loads from one site to another flying over the Martian surface.

This article has been updated on April 13, 2021 after NASA announced the delay in the scheduled date for the first launch of Ingenuity.