Robots can charge electric cars, park vehicles, and even help out at dealerships with some artistic gifts. And the robots soon they will also build cars for SEAT. Of course, a robot in a factory is nothing new, but new ones EffiBOTs of the Spanish firm are already beginning to do some of the work that human operators do, especially those that cause the latter more problems.

The EffiBOT is a fully autonomous robot created by Effidence, a French company with which SEAT has worked to adapt its operation to the processes of the Martorell factory in Barcelona. The company has integrated two of these intelligent machines into its production plant to be able to deliver parts to the assembly line and transfer material between different locations, which results in higher productivity. The idea is to support the human, not replace him as a rebellion of the machines.

Unlike Automated Guided Vehicles (AGV), which require magnetic rails to operate properly, Autonomous Mobile Robots (AMR) like the EffiBOT they can plot their route to a certain destination and avoid obstacles along the way by recognizing their surroundings. Thanks to readings through cameras with 360-degree viewing, the system can be configured to stop in front of or move around the above obstruction, allowing you to continue on your way.

The function “Follow me” allows you to follow the operator who touches your touch screen as they walk through the factory, without the need for them to carry any additional devices. It can be configured for a person walking in front, on the left or right side of the vehicle. It is not necessary to pull or push it manually, as the EffiBOT It can transport all kinds of materials for the assembly of the car, being able to deal with up to 500 kilos. In addition, various equipment and tools can be mounted on top. 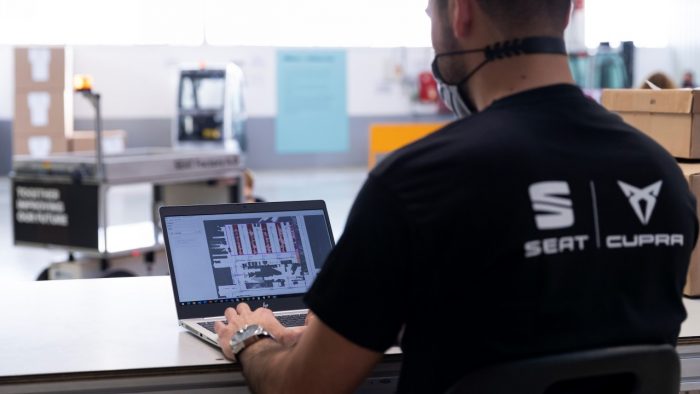 The navigation system gives you a cruising speed of up to 6 km / h. While it does not appear to be a fast-moving vehicle, its design offers good crossover capability with a two-wheel drive (2WD) or four-wheel drive (4WD) function. The EffiBOT it can also ride on uneven surfaces and slopes of up to 30%, as well as moving in two directions to avoid useless maneuvers. Its IP54 degree of protection also makes it a highly capable robot for outdoor use.

“Autonomous mobile robots place us at the forefront of innovation in the automotive sector. They are also a clear example of how robots can collaborate with employees to facilitate their work. Its incorporation contributes to promote Industry 4.0 and become more efficient, flexible, agile and competitive”, Highlights in the statement Herbert Steinerel, vice president of production and logistics at SEAT. In the end, it will be a member to thank in the 2,800,000 square meters of facilities.

In addition to the EffiBOTs, and as an example of the transformation to turn the Martorell plant into a smart and connected factory, SEAT also has around twenty collaborative robots in the assembly areas. Among them are the “cobots”, Who are in charge of applying the labeling to the Ibiza and Arona models. However, it should be noted that the two fully autonomous robots are in an experimental phase, although SEAT intends to have more units in the near future.

In recent years, SEAT has implemented technological innovations throughout its production cycle, such as EffiBOTs, collaborative robots, automatic guided vehicles (AGV) for interior and exterior surfaces, and drones for logistics transport. These steps, combined with more efficient data management through the use of artificial intelligence (IA), big data(big data) and block chains(blockchain), allow more efficient, flexible and agile processes.