Journalist Edna Schmidt, 51, passed away on June 24. The sad news surprised more than one since Schmidt had barely given an interview last April to the also journalist Neida Sandoval. “If you knew what a beautiful mark you left here on earth, dear friend,” Sandoval wrote in the caption he shared of the missing journalist on his networks. “And your words stay with me ‘We are two oaks, you and me’. What a privilege to have recently heard your voice telling me how eager you were to get back to work. God had other plans for you. Rest in peace dear Edna Schmidt. I love you eternally, warrior of life! “

In the interview with Sandoval, Schmidt spoke about his problem with alcohol, the death of his mother and about the discrimination he experienced on Telemundo. After so many tragedies that he had lived, he had found his refuge of happiness in his native Puerto Rico. But death surprised her. “Schmidt suffered a fall and hit his head causing him to hemorrhage,” María Elena Salinas replied to one of her followers who asked her the cause of Edna Schmidt’s death in her networks.

Edna Schmidt was one of the journalists for Univisión and Telemundo

Schmidt was one of the best-known faces in the news to America’s Latino audiences. She had recently reappeared to denounce the bad treatment she had received years ago when she was fired for her alcohol problems.

In 2011, Schmidt was fired from Univision after being found drunk in the channel’s parking lot. After undergoing two treatments where she was interned, the journalist appeared on television on the Telemundo network in Chicago. Two years later he left Telemundo and sued them for discrimination. “So many things, hypocrisy, the stab, because it is true that I had that little problem that I had, but what hurt me the most was that in those people, who thought I could trust, they stabbed me in the back like you don’t. you imagine and that hurts… But I always say, Daddy God takes care of those people because what is done here is paid for, ”said Schmidt in an interview with Sandoval. “I want to forget it because I am not a spiteful person… There are two words that do not exist in my vocabulary: one is resentment, that does not exist in my heart, and the other is that I am no longer in such a hurry, in this industry always running, for me it is over, I am no longer in a hurry… ”.

According to the lawsuit, Schmidt alleged that she took the job being clear from the first interview with her problem with alcohol, and that instead of helping her in the moments of fall, they discriminated and fired her, reports La Opinion.

Edna Schmidt’s mother passed away last year during the pandemic.

Moved, Neida Sandoval tells how her colleague Edna Schmidt managed to find peace After a long talk with her colleague Edna Schmidt, Neida Sandoval recognizes that the Puerto Rican is a strong and brave woman who fights every day against that addiction that once made her hit rock bottom . In addition, the Sin Rollo panel congratulated her on that conversation where the very real journalist was seen … 2021-04-21T20: 02: 03Z

Schmidt lived fighting alcohol every day. “She can help other people,” Neida said of Edna in April of this year. “This fight is daily because an alcoholic is not cured, an alcoholic struggles every day to be sober. I feel that the most important thing with Edna, not only did she find peace, love, tranquility in her little farm … She found that awakening of understanding that it is a battle she has for the rest of her life ”.

Schmidt was engaged when her partner died 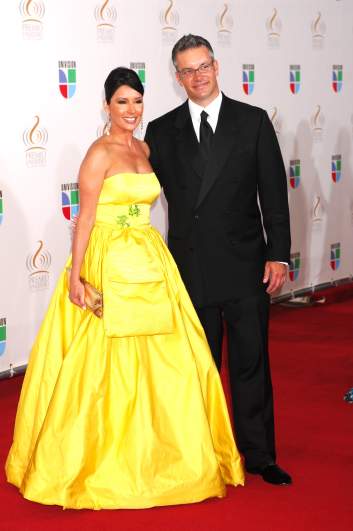 Edna Schmidt with her fiancé David, who passed away before the wedding.

Edna was engaged to be married when her partner died suddenly. After losing his loved one named David, of Ecuadorian roots, Schmidt took refuge in alcohol when he fell into a serious depression. One that he cured by taking 2 and 3 bottles of white wine.

After losing his job to alcohol, Schmidt left television and traveled to Ecuador for 5 years. “I needed no one to recognize me, for no one to know who I was, an anonymous person.” Schmidt recounted last April. “And they gave me their heart, what more could you ask for … My fiancé who passed away had Ecuadorian roots, and then I told myself I have to go back to see where he is.”

Edna Schmidt spoke of what she lost because of her alcoholism The journalist made known her addiction to alcohol, and spoke of how she has recovered her health and her life by acknowledging her alcoholism. Wake up America with the latest news and the best of entertainment: gossip, games, contests, helpful tips, and special guests. Presented by: Karla Martinez, Satcha Pretto, Alan Tacher, Johnny Lozada, Ana Patricia,… 2014-11-11T14: 36: 19Z

Schmidt began his journalism career in Puerto Rico, before moving to Chicago in 19992 to work with WGBO-TV, a local Spanish-speaking station. And before coming to Univision, he built a career in Miami, Florida with Telefutura’s “Noticias al Minuto”.