The crisis in Spain it will be long and the negative numbers will last for years. The IMF forecasts a growth of 6.4% of GDP for this year and the Fiscal Authority (AiReF) forecasts 6.6%, but both recognize that the economic levels before the pandemic at least until 2023 and that the Spanish deficit will be the highest of the neighboring countries until 2026. Likewise, the Government plans to update the macroeconomic scenario and the forecasts for the short term this Friday.

Maria Jesus Arroyo, Professor of Economics at CEU San Pablo University, explains to 20 minutes which coincides with these organizations: Spain will take time to recover the rhythm and, in his opinion, will need “restrictive measures” to reduce the deficit, which the IMF places this year at 9%. “The Spanish economy suffers from important structural rigidities that delay the recovery and make us get out of crises later and with major problems, such as unemployment. “

“I believe that we will not take so long to recover,” he says, instead, Rafael Pampillon, professor at IE Business School, who considers that there is “a consumption retained by the closures and by the confinement” that will be “uncovered” in the coming months. Pampillón describes the expected growth of around 6% as “historic” despite the fact that the Spanish economy fell more than 11% in 2020. “The important thing is going to be that the economy grows,” he says.

The debt, which will be around 118% this year, and the deficit, which could be 9%, “are two elements that are related,” says Pampillón, who considers that there are expenses “that can be reduced.” In this sense, he calls for a “rationalization of government spending” and asks not to raise taxes on families and companies so as not to “drown” them. Roy cobby, a researcher on digital economy at King’s College London, gives another perspective: “The IMF has been seen to be in favor of strengthening the fiscal capacity of States, with a combination of wealth or inheritance taxes“For him, one of the keys is to” rebalance the balance “between large technology companies and small and medium-sized businesses in tax matters.

Arroyo, Cobby and Pampillón agree that a good vaccination campaign will be essential to recover the tourism sector, on which Spain is highly dependent. And, although the latter believes that the season could be saved “quite well”, Ángeles Baeza, professor of Finance at the University of Granada, is not “optimistic” in this regard, because so far “the vaccination process is being slower than expected“.

Spain is still dragging the 2008 crisis

The problems for the Spanish economy do not end here, because the effects of the 2008 recession still last. “Nowadays, crises tend to last more in time and recoveries do not imply a return to previous levels“Cobby warns. If recovery is slow, he adds, there is a” danger “that more jobs will be lost among groups that” have not yet recovered from the previous crisis, “such as young people and those over 45 years. 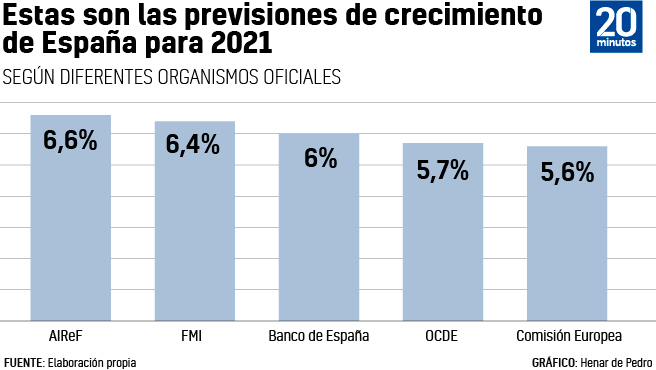 So they say Pampillon Y Stream, the most important reform is that of the labor market. The IE professor points out that one of the solutions may be “the elimination of the temporary contract” and the commitment to “the single contract”, because “permanence in the company” would be encouraged.

Baeza also points out the need to change the production system, betting on “greater diversification, for example, to be less dependent on tourism “, and Cobby focuses on the benefits that an” active industrial policy “would imply, that is,” a transition from activities with low added value to those with a higher return on investment ” .

“It is a pity that we are not able to take advantage of the 140,000 million that the EU has offered to our country”

In such a complicated context, Spain runs the risk of lagging behind the rest of the European partners. “The management of EU recovery funds is a great challenge for Spain right now. It is a pity that we are not able to take advantage of the 140,000 million euros that the European Union has offered to our country and that, to begin with, we only go to limit to 72 billion disbursed in the form of transfers, “laments Ángeles Baeza, who asks to allocate these resources to” projects that create value. “

Roy cobby he claims that the previous crisis “left southern Europe isolated” from the “most dynamic” economies of the Union, such as Germany or the Netherlands. “There are much smaller countries that have known how to specialize in key activities,” he says, and that is why Spain must work “with those countries”, such as Italy or France. to develop common policies on energy and digital transition. And it issues a warning: the European recovery “should not only be associated with the pandemic, but also with the future of the continent.”