Edin Dzeko and Borja Mayoral brought Roma closer to the round of 16 of the Europa League on Thursday by scoring the goals of the triumph ‘giallorosso’ in the first leg at home to Braga, who played with ten from minute 54, when Ricardo Esgaio saw the second yellow card (0-2). It was a meeting with many emotions, starting with the return of the Roma coach, Paulo Fonseca, to which he was his home, since he managed Braga in the 2015-16 season.

And also in the ranks of the ‘giallorossi’ Stephan El Shaarawy returned, who entered the second half and thus played his first game since he returned to defend the shirt of Roma, a team in which he already played between 2016 and 2019 and at that returned from Shanghai Shenhua in this past winter market.

Roma took a golden victory towards the Olympic Games, despite the fact that Braga’s defense prevented the advantage from being greater. But there was also bad news for Fonseca, as two of his defenses were injured: Bryan Cristante (whom Bruno Peres had to relieve in 7 ‘) and Roger Ibáñez (for whom Gonzalo Villar entered in 53’). 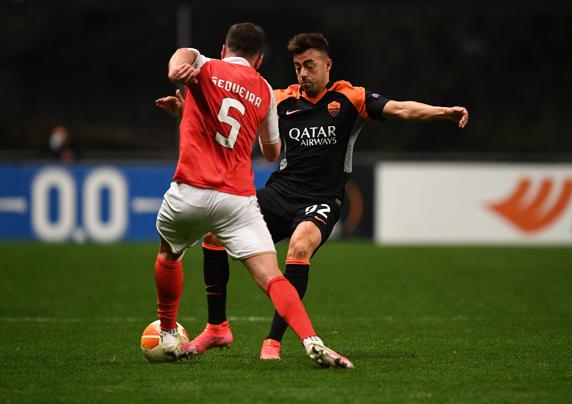 It was Dzeko who opened the scoring with the goal he scored on 5 ‘,’ made ‘by Leonardo Spinazzola with his break-in down the left wing and his pass. The second came in the final stretch, in 86 ‘, and it was Borja Mayoral (who has 4 in the current Europa League and 6 in Serie A). Henrikh Mkhitaryan sent a good pass to Jordan Veretout and he assisted Mayoral, who finished the play coming from behind. Former Barcelona player Pedro had a goal disallowed for offside.

Braga claimed a penalty from Roger Ibáñez on Sporar in minute 50, which the referee decided not to point out after reviewing it with the VAR and despite the fact that the maximum penalty seemed clear. But in general Carlos Carvalhal’s team was harmless and Pau López had a quiet encounter.