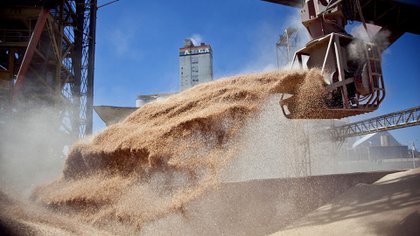 The rise in international prices has a positive impact on the values ​​of soy, corn and wheat exports for the current season (.)

The sharp rise in international grain prices in recent months could give a hand to the declining national accounts in 2021 and ratify the agribusiness sector as the largest generator of foreign currency in the country. The jump in the values ​​of wheat, corn and mainly soybeans, would bring foreign exchange earnings from exports to more than USD 29,000 million, raising the gross value of the 2020/21 harvest to almost USD 28,000 million.

This is indicated by a report from the Rosario Stock Exchange (BCR) and additional information provided to this medium. Strictly speaking, the exports of these three crops, added the soy by-products and taken at current prices, would report USD 29,097 million income for the country, 13% more than that dispatched in the 2019/20 campaign, while the gross value of the harvest would reach USD 27,927 million, positioning itself 37% above the previous cycle and reaching a historical record.

Of course, these estimates are contingent on the development of the current campaign, with the soybean and corn planting work advanced by 20% and 40% respectively, but there are difficulties for its progress in some areas of the country due to situations of water deficit. For this reason, the future of the harvest (calculated at 50 million tons for soybeans and 48 million tons for corn) will depend on the efficiency of the rains, since a drier climate is expected in the coming months due to the phenomenon. of the girl.

In the case of wheat, the outlook is a little less uncertain, since the harvest began in the north and center of the country, with yields well below expectations due to the severe drought that affected, and in some areas, continues to affect , to cultivation. Under this context, the Rosario entity expects 16.7 million tons to be collected. 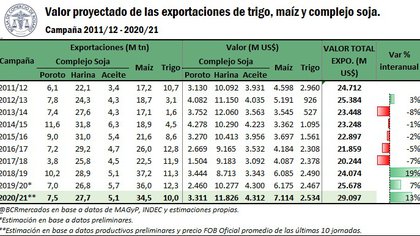 Projections on the value of future exports (Rosario Stock Exchange)

That said, and if the aforementioned production estimates are obtained, the soybean complex is expected to dispatch a total of 40.3 million tons of beans, flour and oil for USD 19,449 million, well above the USD 17,037 million registered in the campaign. pass. In the case of corn, 34.5 million tons would be shipped for USD 7,114 million (almost USD 1,000 million above the previous cycle), while in the case of wheat, it is estimated that 10 million tons will be shipped abroad for USD 2,534 million.

For Matias Lestani, Head of the Department of Economic Analysis of Argentine Rural Confederations (CRA), the total value of exports for the 2020/21 season, taking into account the aforementioned crops, added to barley, sunflower and their by-products, could reach USD 31,858 million. However, he clarified that this simulation does not take into account the climate issue, which this year is adverse for crops, with dry forecasts for the region.

Regarding tax collection via export duties, the State will also benefit from an increase in the tax to be received. According to calculations by the BCR, taking into account the export duties in force as of 2021 (33% for soybeans, 31% for their sub-products and 12% for corn and wheat) and current FOB prices, the State would retain USD 7,523 million , which converted into pesos would be approximately $ 713,924 million.

As already mentioned, the rise in the estimate of exports and in the gross value of the harvest are based on the upward trend of international prices from July to this part, placing soybeans at the highest prices since mid-2016 and corn at its highest value in a year.

As detailed by the head of the Analysis Department of the Grassi grain broker, Ariel Tejera, “Since the end of July, the grain markets have shown renewed firmness, reaching previously unthinkable values. In Chicago, soybeans jumped more than 30% (about $ 100 a ton) to over $ 430 a ton. Corn also advanced about 30% (about 40 dollars per ton), to gravitate over 165 dollars per ton, while wheat has suffered a similar course, with prices that have gained firmness in the main export origins of the world ” . 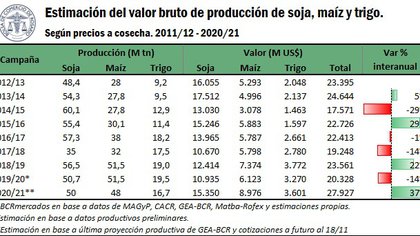 For Tejera, the sustained rise in prices was due to a set of factors that have been developing since the middle of this year, such as the recovery of the main world economies, low rates and a weak dollar against the main world currencies. But if one goes directly to the fundamentals of grains, “a change of scenario stands out, towards a much tighter one (in supply), for the world, in general, and for the United States, in particular,” a question that also it was reflected in the corn ”.

“In recent months, the United States Department of Agriculture (USDA) has marked successive cuts in production projections for the northern country, along with important increases on the demand side,” explained Tejera. Taking the latest official numbers for soybeans, “a very tight remnant is expected for the 2020/21 cycle in the North American country, with a stock / consumption ratio that would be located at a meager 4.2%. This is the lowest value since 2013/14. It is a very sensitive data for the market ”.

Finally, he explained that “on the demand side, as the protagonist, China appears, which has shown great dynamism, with imports that are projected at a historical level of 100 million tons” and added the climate issue in South America, which ” adds a question about the productive balance that Brazil and Argentina will reach. Good prospects remain for the moment, but surprises must not be ruled out ”.

The agribusiness consultant, Teo Zorraquin, indicated to . what the increase in prices will impact on the profitability expectation of producers, in a context where production costs, as in the case of inputs that “in historical terms are well in dollars”, but the threat of a dry climate arises and the tax burden. However, a priori, the increase “in Excel allows you to think that the campaign is going to have a good income for the producer and in some cases rebuild the financial situation.”

However, when making long-term investments, taking into account that “there is a reasonable utility to think about investments” with a soybean of up to USD 350 to the producer, there is “a paradox” due to the lack of confidence and unclear government rules for the agricultural sector. In this sense, Zorraquín exemplified: “Today you register a profit of USD 100,000 and you ask yourself, what do I invest it in? And there comes the component of a crisis of expectations ”.

“There are some agricultural companies that have a real crisis and then there are companies that are financially well but look ahead and say, what should I do? Do I invest or not? When it comes to investing in crops, the people who more or less work well did not skimp on inputs, but the question is what is being invested in the future, as it has to do with investments that return not so fast and that has to do with the country framework. If you have a reserve in pesos or in the silo, you wonder if you are immobilized in a 10-year investment or if you are more liquid attentive to a tax on large fortunes. This is the paradox ”, explained the specialist.

“The main focus is ‘give me confidence and clear rules of the game that we will find credit and part of my earnings will go to investment.’ As long as the country does not generate confidence, investments will be restricted in agriculture ”, concluded the consultant.