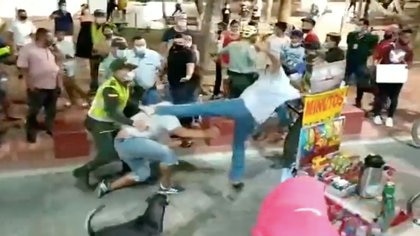 Fighting is the cause of 57 percent of homicides in the country. Photo: . Archive

According to data that the National Police gave to the television newscast Noticentro Uno CM &, Of the 1,614 homicides that have occurred in Colombia, 917 were perpetrated in the midst of fights and confrontations between citizens themselves in cases of intolerance, which continues to be a matter of concern for the authorities in the country.

“57 percent of the homicides that occur for any cause are generally due to intolerance, this means that one out of every two cases that are dealt with is for this cause,” General Carlos Rodríguez, director of Security, explained to the news. Citizen of the National Police.

Although this data indicates that there was a small reduction in homicides due to intolerance, since in 2020 there were 925 murders for this cause, according to the Police figures.

Read More: Riñas, the biggest trigger for homicides in Bogotá during 2020

In the television news program they also indicated that In the cases of homicides due to intolerance, 439 were for revenge, that is, they increased by 6 percent compared to last year, when 414 murders were recorded for this reason.

It was followed by murders in the midst of social intolerance, which in 2020 were 452, although this year they decreased to 423, that is to say, they fell by 6 percent.

Due to passion problems, as reported by the National Police, there were 40 murders in 2020, and this year 33, a decrease of 18 percent.

However, violent deaths due to family problems increased in 2021, with a record of 22 murders, when last year 19 had been reported, that is, they increased by 16 percent.

In Noticentro Uno CM & they also reported that The areas in which the most cases of violent deaths in the midst of intolerance were registered are Antioquia, Cali, Bogotá, Barranquilla, Cartagena, Sucre and Cúcuta.

“Given this scenario, it is imperative that all Colombians be aware of the true value of life. We insist that, due to some minor discussions, it can even lead to homicide where a good citizen happens to violate the criminal law, that is, he commits a crime and very surely we end up with a family that has a human being in the cemetery and with unfortunately another person in jail ”, expressed General Rodríguez.

The officer also indicated that people in the country should avoid entering into confrontations and seek mediation with the authorities, so that differences between citizens do not end in tragedy.

“It is everyone’s commitment to avoid confrontations and to notify the authorities so that the National Police, through its mediation process, can resolve those minor inconveniences that arise in daily living. This is how we started our police mediation process in order to prevent these personal injuries that occur one day later from turning into homicides or serious cases due to not achieving this conciliation between the parties ”, concluded the Director of Citizen Security of the Police.

Before March 6, the Prosecutor’s Office must decide whether or not to call former Senator Uribe to trial in the case of false witnesses

With Mateus Uribe and Luis Díaz on the court, Porto defeated Juventus and set foot in the quarterfinals of the Champions League

José Pékerman spoke about his departure from the Colombian National Team