Almost two months into the process, Mexico’s vaccination plan is one of the slowest in the world, while other countries are at an accelerated pace in their inoculation campaigns with hundreds of thousands and even millions of daily applications.

According to data from Our World in Data from the University of Oxford –until February 15–, Mexico is far from other countries in terms of vaccines applied per 100 inhabitants. Israel is the first place in the world with a rate of 76.2, followed by the United Arab Emirates, with 51.43; Great Britain, with 23.33 and the United States, with 15.81. In this area, Mexico appears in 18th place, with a rate of 0.59.

In terms of the daily average of vaccinations administered per 100 people, Mexico is also far behind. Israel is also the first site in this area, with a rate of 1.39. Mexico has a rate of 0.01.

As of Monday, a total of 178.7 million immunizations had been applied worldwide. The United States and China are the countries that have administered the most doses to their population in total numbers, with 55.2 and 40.5 million, respectively. Mexico, until that day, had applied 749 thousand 682 doses, a figure that rose to 915 thousand 383 at the end of Tuesday, February 16.

Regarding the percentage of people who have received two doses (until February 15), Israel also ranks first with 30.17 percent, followed by the United States, with 4.2 percent and Malta, with 3.68 percent. As of Monday, Mexico had applied two doses to 86,198 people, which is equivalent to 0.07 percent of the population. The government announced that the arrival of the biologicals, last Tuesday, would be to give the second injection to health personnel.

A projection made by The New York Times, based on current vaccination rates, estimates that Mexico would take almost nine years to vaccinate its entire population (126 million inhabitants), while Israel (9 million) would take a month and the United States (330 million), 6 months.

Mexico makes an agreement for the arrival of Sputnik V vaccine 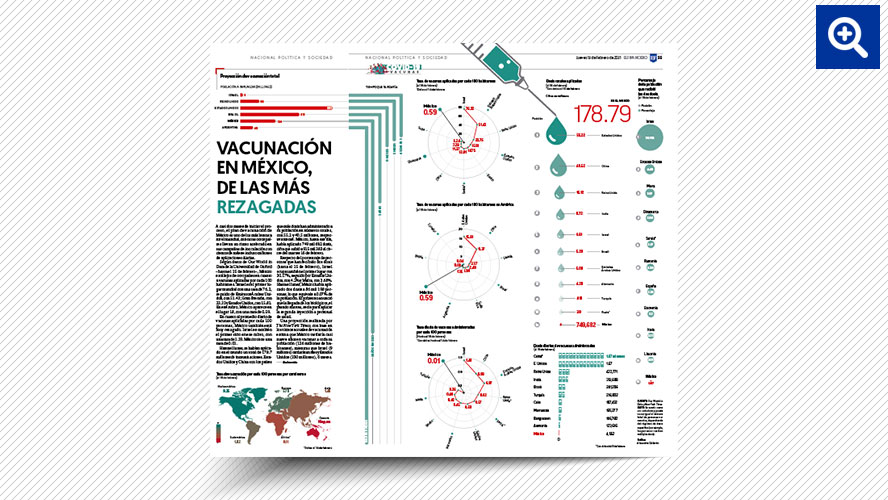